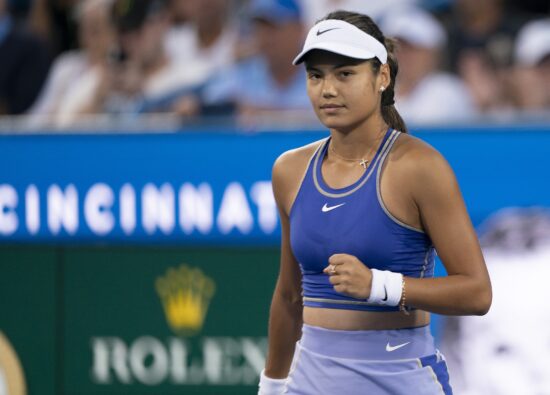 One of the stories of the US Open in 2021 may not have ended based on the performances that we have seen from Emma Raducanu already this week. The British teenager has thrashed both Serena Williams and Victoria Azarenka at the Cincinnati Masters this week, and below, we will examine her latest Vegas Odds for a second Grand Slam title at Flushing Meadows.

Surprisingly there could be excellent value in siding with the form of Emma Raducanu at this stage, as she has drifted in the betting for the US Open with BetOnline. When we last looked at the odds in our Women’s US Open preview, the Brit was a +1600 chance. However, now, she is available at +2200.

It would appear that the bookmaker may be slower than other sites to react to the performances at the Cincinnati Masters, as she is currently a +1400 chance with BetMGM and also as low as +800 with some offshore bookmakers.

Is There Value In Emma Raducanu At US Open 2022?

Undeniably there is a lot of value in siding with the reigning champion at the US Open later this month. Form could be a big factor going into the tournament, and her case is made even stronger given that players with shorter prices have underperformed on the hard surface over recent months. Naomi Osaka was eliminated in the first round of the Cincinnati Masters. However, she remains at a shorter price in the betting at +1400.

Meanwhile, Simona Halep is currently the second favorite at +800, and the Romanian may face injury concerns after pulling out of her third-round tie in the Cincinnati Masters. However, Iga Swiatek remains the outright favorite to win the US Open this year. She breezed past Sloane Stephens in straight sets in her round of 32 match. Regardless, there are still questions about whether the hard surface brings out the best in her game.

The 2021 US Open was one of the most memorable Grand Slam events in recent memory, as Raducanu became the first qualifier to ever win a Grand Slam title. She also became the youngest player since Maria Sharapova to win a Grand Slam, and the second player to win the US Open on her debut effort.

Her dominance on US courts also needs to be appreciated. She didn’t drop a set on her way to winning the US Open last year. To this point, that has been echoed by her feat in Cincinnati this year. She is keeping very high-quality company in the WTA event this week, and the fact that she is yet to drop a set against players of the caliber of Serena Williams and Victoria Azarenka can’t be ignored.