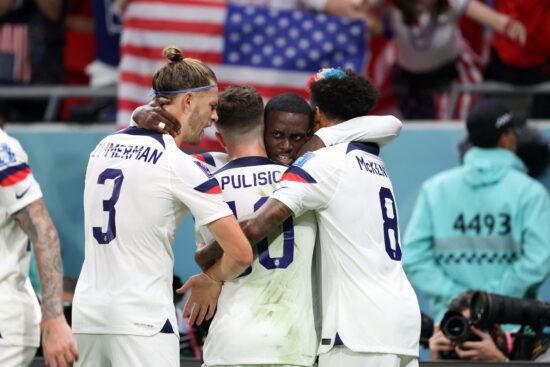 If you’re looking for the latest World Cup predictions for England vs USA, then look no further than Vegas Odds.

A game that all fans of the USMNT would have been looking forward to when the World Cup draw was made finally takes place on Friday afternoon. The United States will be looking for their first win of the group stages, while England could effectively ensure their passage through to the round of 16 with a second straight success.

Gareth Southgate was left with mixed feelings after England’s opening win of the World Cup. The coach was unsurprisingly happy with his attacking players, as the Three Lions scored six goals in a single fixture for just the second time in World Cup history. However, sloppy play at the back allowed Iran to score twice. But, England was extremely strong throughout the match and made a team that had lost just twice in their previous 22 internationals look very ordinary.

Jude Bellingham’s arrival on the international stage offers England something different, and the former Birmingham City star opened the scoring. It was also a game of vindication for Bukayo Saka, as the Arsenal man scored twice in his first major tournament appearance since missing the crucial penalty in shootout defeat against Italy. Marcus Rashford and Jack Grealish also grabbed goals from the bench. However, England will once again be without Kyle Walker and James Maddison for this fixture.

For 45 minutes, the USMNT looked extremely dominant in their opening game against Wales. They were excellent value for their lead in the opening 45 minutes, as Timothy Weah managed to achieve something that his legendary father couldn’t, as he scored his first World Cup goal. However, despite their dominance, that would be the U.S.’s only shot on target in the 90 minutes.

Gregg Berhalter’s team looked increasingly more passive in the second period, and they failed to deal with the direct threat provided by Keiffer Moore. Wales managed to grow into the game, and were ultimately more than good value for their equalizing goal, scored by LAFC’s Gareth Bale. One of the most concerning factors was just how quickly the U.S. tired in that game, meaning that the limited game time played by the core of the squad is likely to be a factor once again on Friday.

The USMNT looked especially vulnerable down the wings in their opening game, and they will come up against two players in their very best form on Friday afternoon. This could be a tournament that Bukayo Saka lights up, and he was extremely impressive in England’s opening game. We could see that momentum being maintained on Friday with a third goal in two games.

England has won eight of their eleven internationals against the USMNT. However, the Three Lions are winless in two fixtures at the World Cup. But, this is a completely different England team, which has impressed at major tournaments over the previous six years.

The depth that Southgate has to call on means that we struggle to see past the Three Lions, who looked back to their very best against a compact Iran on Monday. How quickly the USMNT faded in their opening game also means that their players appear to be suffering with the lack of game time that they have had coming into the World Cup.