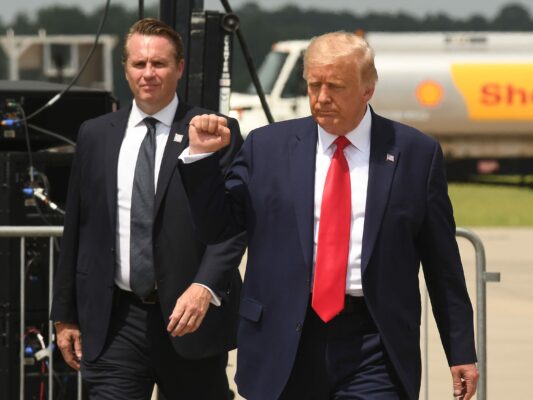 When it comes to Donald Trump Vegas odds, there are some fascinating markets currently on offer.

There are few more controversial people on the planet than Donald Trump. However, given how unpredictable the 45th President of the United States can be, he certainly makes for very interesting betting markets. Some of the most exciting entertainment markets centered around Donald Trump can be found here.

Donald Trump has been suspended on Twitter since January 2021 after inciting violence with the storming of the Capitol Building.

However, many believe that it’s only a matter of time before he returns to the social media platform. The total number of characters in his first Tweet is interesting, but we would potentially lean toward Trump delivering a short message to his followers on his first Tweet after suspension.

Donald Trump has filed for bankruptcy on six occasions throughout his business career. This was an argument that made its way into a debate during his Presidential Election success, with Hilary Clinton rightfully claiming that six of his companies had gone into bankruptcy. However, the odds certainly don’t suggest that he will be filing for bankruptcy for himself personally in the near future.

Donald Trump has been married three times, with Melania Trump being the most recent to tie the knot in 2005.

She lived in the White House with Trump throughout his presidency, and it looks incredibly unlikely that they will be getting divorced any time soon. Donald and Melania have one child together- Barron Trump.

Throughout his presidency, Donald Trump constantly hit back at the relationship between the US and China. He instantly believed that China was taking advantage of the States, before later launching attacks on Communist Party leader Xi Jinping.

Trump later praised China for their response to its handling of the COVID-19 pandemic, before launching a campaign of criticism at the start of 2020. Given his ill-feeling toward China by Trump, it looks unlikely that he will be visiting the Asian country anytime soon.

When Trump was elected as president, many feared that the relationship between Russia and the US could soar. However, throughout his presidency, Trump and Vladimir Putin’s relationship was a relatively good one. He constantly praised Putin and rarely criticized the Russian president.

However, in an interview with Piers Morgan, Trump laid into Putin for his handling of the invasion of Ukraine. However, a visit to Russia could be on the cards, as the former US president announced that he would be happy to help in negotiations with the Russian President.