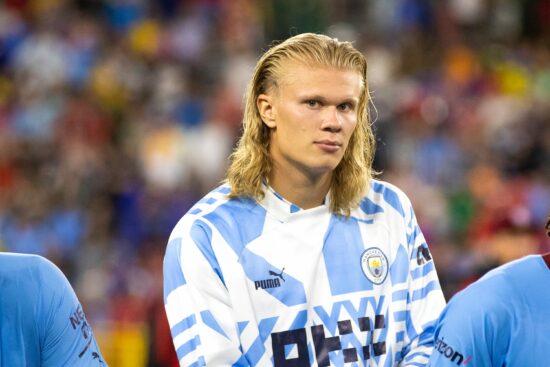 Manchester City’s staff were busy during the offseason, making a number of deals with elite soccer players. Their biggest signing of the summer transfer window is Erling Haaland, who arrived from Borussia Dortmund for $61.55 million.

That’s a lot of money, but many believe the 22-year-old Norwegian striker is worth way more. In fact, according to Transfermarkt, his current value is over $150 million, which makes him the world’s second most valuable player (just after PSG’s Kylian Mbappe).

Haaland was tremendous in Germany, but now is time for him to prove himself in England. If you have faith in him, placing some Premier League prop bets seems like a good idea. Top soccer betting sites have plenty of interesting Erling Haaland-focused markets, some of which we’ll analyze in this post.

It was the 2019-20 season when Haaland put himself on the radar of top soccer clubs in Europe. While playing for Red Bull Salzburg, he went on a scoring rampage in the Champions League, putting away eight goals in six games of the group stage.

That was enough for Borussia Dortmund scouts to fall in love with him, which made the club sign the rising star in December 2019. Over the next two and a half seasons, Haaland became one of the most lethal strikers in the Bundesliga, scoring a total of 62 goals in 67 games.

Even though his numbers were terrific, he won no top-scorer awards during his Bundesliga days. Is he going to achieve this in the Premier League? Oddsmakers think so, making him the #1 favorite to win the 2022-23 Premier League Golden Boot at +275.

That’s not the only goals-based bet with Haaland in the main role. Let’s check out a few other interesting EPL props.

If you think the reigning Premier League champions are going to keep the trophy in their possession, this prop bet might be right for you.

Haaland’s record as a Borussia Dortmund player was 27 goals per season.

Can he do better as a Manchester City player?

Score Home AND Away Against Man United

Last season, Manchester City beat their local rival Manchester United in both of their Premier League duels. With Haaland on the roster, the Sky Blues might be able to do the same again.

The big question is how much of an impact will Haaland make against the Red Devils. If you think he’s gonna score in both duels, why not back him at +350?

The last time Bournemouth played in the Premier League (2019-20), these guys scored 40 goals across the entire season. This time, they’re expected to do even worse. In fact, some believe we might see Haaland scoring more than the entire Bournemouth squad. If you think that too, you can bet on this Premier League prop at the odds of +1300.

Not only do bookies think he’s going to be the Premier League top scorer in the 2022-23 season, but they also see him as the main favorite to win the PFA Player’s Player of the Year Award. Being awarded since the 1970s, the accolade is given to the best player of the season.

Mohamed Salah was the last season’s winner and if you think Haaland can take it away from him, betting on that prop bet might be a good option. Right now, online sportsbooks are giving +600 on this bet.

If you’d like to learn more about this betting market, make sure to check out our PFA Player’s Player of the Year piece.

Things to Think About Before Betting on Erling Haaland

Last season, Haaland played only 24 Bundesliga games (out of 34). The reason? He missed the other games due to injuries. In the 2021-22 season, the Norwegian goal machine ended up on the injury list on four separate occasions.

Knowing this, there’s obviously fear that he’s going to miss a significant portion of the 2022-23 season sidelined. This goes especially considering that the Premier League is way more physical than Bundesliga. We’re not claiming this without proof – several studies have confirmed that the English top-flight is more intense than any other soccer league in the world.

Further, playing for Manchester City means not only competing in the EPL, but also in the Champions League, FA Cup, and League Cup.

All this, however, doesn’t mean Haaland will disappoint. On the contrary, we expect him to shine in Manchester City; we just aren’t sure that he’s actually going to explode in his maiden season.