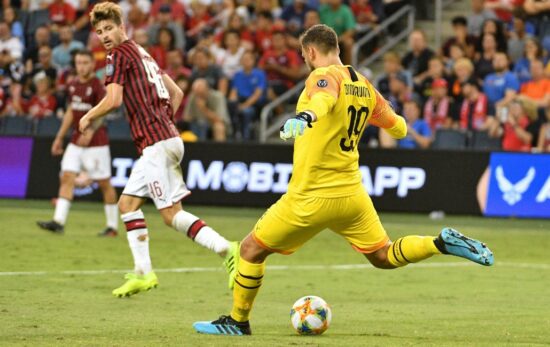 One of the biggest transfers in Europe this summer took place today, as Gianluigi Donnarumma inked a new deal with the French champions, Paris Saint Germain.

Gigi Coming to the City of Lights

Arguably the best goalkeeper in the world, and the one who pretends to be one of the best ever, Gigi Donnarumma officially became a part of Paris Saint Germain. He signed a five-year deal today, worth up to $71 million, with $48 million guaranteed and the rest being in bonuses.

This is one of the biggest contracts in history for a goalkeeper, but even so, it seems that it is the best possible move made by the French team.

The 22-year-old decided to leave AC Milan at the end of the previous campaign, after six years spent among Rossoneri. Sinisa Mihajlovic discovered Donnarumma at the age of 16 and immediately threw him into the first team. Ever since then, he played 215 games for the seven-time European champs, establishing himself as one of the best goalkeepers in the world.

However, constant disputes with the board and tense relationships with the fans eventually forced Donnarumma to move on and find a new club.

A big reason for his departure was the fact that AC Milan isn’t competitive as it used to be, and in six years they’ve won just one Supercoppa Italiana, back in 2016

He was the best player at the previous EURO 2020 championship, winning that for his constant and excellent performances during the same. He would stop two shots during the penalty shootout in the finals and had the biggest role in Italy’s historic achievement.

PSG Aggressive on the Market

The Saints want to win the UEFA Champions League title, and they are determined to do that already this year. After the finals in 2020, they were eliminated in the semis this season, and the board saw that as a major disappointment.

That is why PSG already landed Georginio Wijnaldum, Achraf Hakimi, and Sergio Ramos. These three guys will present a major boost to the already present core, which was one of the best in the world over the past few years.

According to the information from within the club, the Saints are not going to stop there, but try to add at least two more big names, one striker and one defensive midfielder.

Head coach Mauricio Pochettino will have his hands full during the preseason because he needs to create chemistry both on the field and inside the locker room.

Various media reported last year that the environment in PSG wasn’t that healthy and that apparently, the players were divided into groups, not having good relationships.

It will be interesting to see how Neymar and Sergio Ramos work together, with these two having multiple clashes during the Brazilian’s stay in Barcelona.