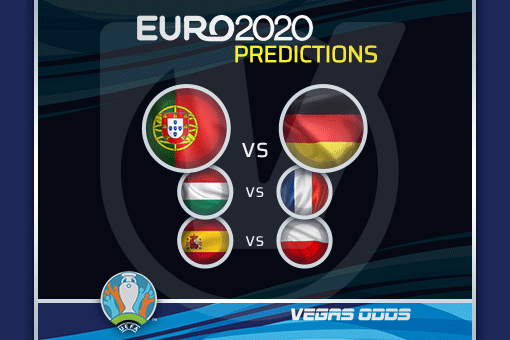 The EURO 2020 “death group” brings another spectacle as the reigning European champions Portugal and Germany meet in the derby of the round.

Apart from this match, Hungary will meet the world champs France, and Spain faces Poland.

Hungary fought bravely against Portugal in the opening match, even having some chances to score, and stun the favorites. However, that didn’t happen, and in the end, Hungarian defense collapsed, allowing three goals in the span of seven minutes.

Over the past five games Hungary played, four finished with just one side scoring, but they couldn’t score in the recent two.

As for France, they defeated Germany 1-0 in the first round but didn’t really show some fantastic performance. They got the lead after Hummels’ own goal, and after that, defended throughout the entire game threatening from counter-attacks. And that was it. We need to add that Gauls did that very well, but overall, that was it, nothing more.

They shouldn’t have trouble beating Hungary as Deschamps has world-class players at every position, which can’t be told for his Hungarian counterpart. Since the odds on their plain victory are too low, we can increase them by betting on France’s win with a -1.5 goal handicap.

Selecao got three points against Hungary, and they don’t need to rush into anything against Germany on Saturday. That is perfect for Ronaldo and the boys who play the best in these types of situations. Extreme quickness up front allows them to lay back and lure the opponent before striking on a fast break.

Germany won’t have any other option but to be open and aggressive. They are already behind the biggest rivals and need to find a way to erase that deficit. Though, we don’t believe in their attack at this championship because Die Mannschaft doesn’t have the needed players for this system of play. They don’t have that target man in the box who will pick up the passes from wingers and midfielders, converting them into goals.

That is why we believe that the most suitable option for betting here is Under 2.5 goals.

Both Spain and Poland had disappointing opening matches. The Red Fury couldn’t defeat Sweden, while Poland lost to Slovakia, which was one of the biggest surprises at the tournament so far.

Luis Enrique will have to change something against the Poles because his attack wasn’t satisfying in the opener. This was the second time over the past three games that Spain couldn’t score, and the only comforting fact here is that they haven’t conceded during that stretch.

On the other side, this was the fourth consecutive match for Poland without a win. All of those games ended with both sides netting, while three went above 2.5 scores. Also, Poland allowed two goals in three games during this period.

Spain is the favorite for us in this game, and we predict their victory because Poland looks very bad.