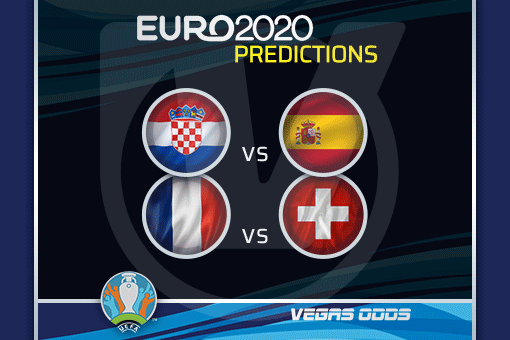 EURO 2020 really gets started when the knockout rounds get underway. Sixteen teams must be cut to eight over the coming days, and there promises to be two exciting fixtures taking place on Monday.

Two nations that finally arrived at the EURO 2020 in their final group games will clash in one of the more eye-catching round of 16 games on Monday afternoon, as Croatia and Spain will be looking to book their passage through to the quarterfinals.

Croatia finished Group D strongly with a first win at the tournament against Scotland. Luka Modric’s class in the middle of the park was the difference between the nations, as he scored a stunning goal to lead his nation to a 3-1 victory. However, Croatia will be looking to end a barren run at this stage of the competition, as they have been knocked out in the first round in the last three European Championships.

Spain also saved their best performance of the tournament so far for their last game. They hammered a sorry Slovakian side 5-0 in Seville, with Aymeric Laporte, Pablo Sarabia, and Ferran Torres among the scorers. Luiz Enrique’s side were strong at both ends of the pitch, but the result could also be put down to just how bad Slovakia were in that fixture.

The Spanish will be looking to avoid another exit at this first round of the knockouts, after exiting the past two EUROs and the 2018 World Cup at the stage immediately following the group stages. This could be a tight affair, and we wouldn’t be surprised to see extra time needed after a draw in 90 minutes. Spain will certainly not want a penalty shootout, as they have missed their last four spot kicks.

World champions France will be back in action on Monday, as they look to reach the quarterfinals of EURO 2020. Switzerland will be the massive outsiders in this fixture, as endured a difficult group stage, winning just one of their three games.

France have shown glimpses of their best form at the EUROs so far this summer. They were professional beating Germany 1-0 on matchday one, before showing flashes of why they are considered the best national team in the world in Wednesday’s 2-2 draw against Portugal. There is a feeling that the French haven’t yet hit top gear, but should they find that level, they will be incredibly difficult to stop.

Switzerland’s four points in Group A were enough to see them make it through as one of the best-placed third teams. They were beaten by Italy in the group stages and took a point from Wales. However, their win against Turkey on the final day was the win they needed to secure their spot in the Round of 16.

France have an excellent record against Switzerland, as they are unbeaten in seven matches. They have also won two of the last four matches between the nations at a major tournament. It would be challenging to see anything other than a victory for the world champions on Monday.