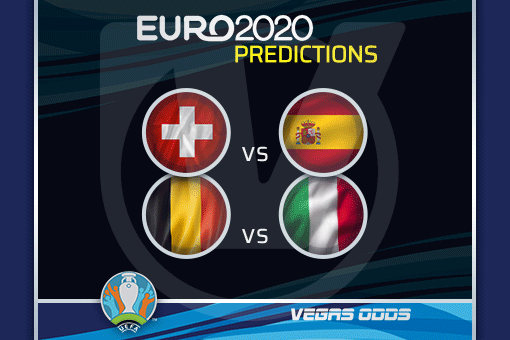 The EURO 2020 quarterfinals are starting on Friday with two games on the program. Switzerland searches for another surprise against Spain, while Belgium and Italy meet in the tournament’s biggest game so far.

The Swiss team made one of the biggest surprises at EURO over the past several editions. They would eliminate France, the world champions, and make room for themselves in the final eight.

Vladimir Petkovic’s side is playing tough and aggressive football, with lots of excitement. They aren’t backing out against any opponent, and that courage eventually helped them to take down the Gauls. Also, Switzerland’s matches are efficient, with six in the last seven concluding with over 2.5 goals.

On the other side, Spain opened the EURO slowly, with two very dull affairs, but after that managed to score 10 goals in two games, five in each, vs. Slovakia and Croatia. All the misses from the first two legs came back. But still, the Red Fury isn’t dominant as many would believe, having some mistakes and errors that are pretty much not understandable.

The Spaniards are without a defeat in the past 12 games, and that is mostly because of their defense, which kept clean sheets in four of the latest six matches.

Spain are coming into form at the right time, and they look like the solid choice to advance here.

The win against Portugal had a high cost for the Red Devils, who lost Eden Hazard and Kevin De Bruyne. These two guys picked up injuries after cheap shots of the Portuguese players and the terrible officiating of the German referee Felix Bruch.

Belgium didn’t lose in the past 13 matches and has five wins in a row, with only one conceded goal throughout that streak. Romelu Lukaku, who knows all the Italian players, will be the biggest weapon for Roberto Martinez and Thorgan Hazard and Dries Mertens.

Italy has problems with their captain and leader Giorgio Chiellini who skipped the match against Austria and could miss this one as well. Azzuri are without a loss for 31 meetings, the best streak in their history.

Also, their defense didn’t allow a single goal in the latest 11 matches, which is incredible. Since taking over, Roberto Mancini did a wonderful job throwing into the fire some youngsters who are now repaying in the best possible way.

Since this is the derby, and both teams have problems with injured players, our prediction here would be under 2.5 goals. Without Hazard and De Bruyne, Martinez is going to set up a defensive tactic. At the same time, on the other side, Mancini has to add more help in the Chiellini-less backline, with Lukaku going against his defenders. All this will decrease the efficiency.