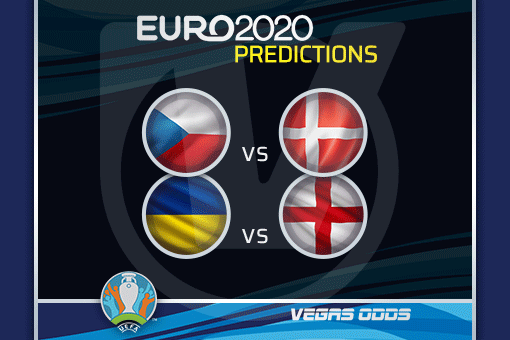 Places in the semi-finals of the EUROs will be up for grabs in two exciting ties taking place on Saturday. England and Ukraine will meet at the Stadio Olimpico, while Denmark and the Czech Republic will be looking to reach a surprise semi-final earlier in the day.

The path is clear for England to reach a first major tournament final since 1966, as just two games stand in between them and a shot at history. However, Ukraine will look to make it as hard as possible for the Three Lions this weekend, as England play away from London for the first time this summer.

Expectation and hope in England has risen to new heights this past week, as Gareth Southgate got his tactics spot on to see off Germany at Wembley. Fans were quick to question to 3-4-3 formation that Southgate opted for against Germany, but hindsight would show that he was completely right in his thinking.

It was a marvelous day at Wembley on Tuesday, as England claimed a first major tournament victory over Germany since the 1966 World Cup Final. Raheem Sterling continued his excellent form by scoring the opener, his third of the tournament. Wembley was sent into a frenzy in the final ten minutes, as Harry Kane wrapped up the win with his much-needed first goal of the EUROs.

Ukraine’s confidence will also be high as they saw off a talented Swedish side in the round of 16. Oleksandr Zinchenko put Ukraine into the lead before the half-hour mark, but the Swedes came fighting back and deservedly equalized in the 43rd minute through Emil Forsberg. However, neither team could find the winning goal in the second half, which meant extra time was needed. The game changed after a dubious red card for Sweden’s Marcus Danielson, before Ukraine stole the win in the 121st minute courtesy of a dramatic Artem Dovbyk winner.

England have an impressive record against Ukraine, as they have won four of the previous seven meetings. The Three Lions also won the last meeting between the nations in a major tournament back at EURO 2012. It looks hard to see past England in this game.

Two sides that weren’t given much chance of going this deep in the competition this summer will meet on Saturday lunchtime with a place in the semi-finals up for grabs.

Denmark are the pick of many neutrals this summer, as they have shown unrivaled character to come back from the heartbreaking scenes in the opening game as Christian Eriksen collapsed on the pitch against Finland. Denmark have just got stronger as the competition has progressed, and they are riding a wave of emotion that looks hard to predict where it will stop. The Danes were excellent in their round of 16 game against Wales, as they claimed a 4-0 victory in Amsterdam.

The round of 16 saw a number of shock results, which meant that the Czech Republic’s win over the Netherlands went under the radar slightly. However, they were fully deserving of their 2-0 success in Budapest. The game changed after a red card was given to Matthijs de Ligt ten minutes into the second half. The Czech’s weren’t about to let their opportunity pass them by, and they took a deserved lead through Tomas Holes with 20 minutes remaining. Patrik Schick continued his excellent form this summer by netting the second.

However, this could be a tight affair between the nations. Five of the previous six meetings have ended in draws, which means that extra time could be on the agenda. However, we feel that Denmark will have enough to get over the line and continue their fairytale in the semi-finals.