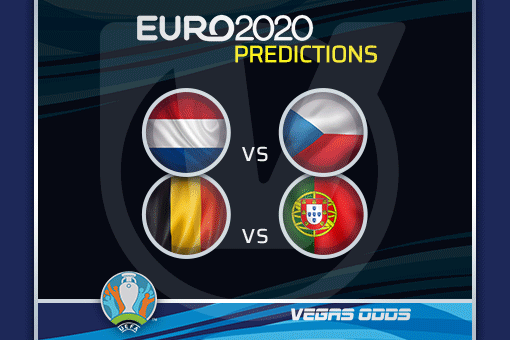 Sunday afternoon at EURO 2020 will be wild. The Netherlands and the Czech Republic add another chapter to their big rivalry. The two sides meet at Puskas Arena in Budapest, promising an excellent fight in front of 65,000 fans.

A few thousand miles to the West, Belgium faces Portugal in Seville, which appears to be the biggest game of the entire Round of 16.

Oranje was the most interesting team to watch during the group stage. They scored eight goals, the most in this phase of the tournament, and are looking excellent in the offense. Apart from that, besides Belgium and Italy, the Netherlands was the only team with a perfect record, three wins, and nine points.

They play total football, with all ten players in the field running up and down, creating incredible pressure on the rivals with or without the ball. In the past 10 matches, the Netherlands scored at least two goals in each, losing just one game during that span while posting eight victories.

The Czech Republic had a solid run in the group stage, beating Scotland in Glasgow, then playing 1-1 with Croatia before losing to England in the latest contest. We need to say that the Czechs didn’t look bad at all against the Three Lions and that it wouldn’t be unfair even if they took one point from that one.

The majority of their games are inefficient, and you had a chance to see that in the group stage. All three were under 2.5 goals, and overall, five of the last seven ended within the same range.

Our pick here is Oranje’s victory because they seem much faster and lethal. We believe that the Czechs won’t have enough speed in the backline to stop all the pacey attacks. Plus, the Netherlands’ players are far better than the rivals.

Pick: the Netherlands to win

The Red Devils finally have all the best players at their disposal. De Bruyn, Hazard, and Witsel are all ready to take on the reigning EURO champions, which is a major boost for the Belgian national team.

Roberto Martinez’s boys won all three games of the group stage, beating Russia, Denmark, and Finland, along the way. As usual, they would crack the opponents with a flamboyant offense, which is the best in the world, we might add. Belgium scored two or more goals in seven of the last ten games across all the competitions.

Portugal had one win, loss and draw, in the first stage, but their group was by far the toughest one involving Hungary, Germany, and France (in that order).

Selecao has problems in the backline, as they allowed six goals in the latest two events, but so far, they have Cristiano Ronaldo, who is the top scorer of the championship with five hits.

However, even though this team has extremely good players and is the reigning EURO champion, we are backing up Belgium to win this one.

The form of the Red Devils is at a higher level, and apart from that, there is a great disbalance between Belgium’s offense and the Portuguese defense.