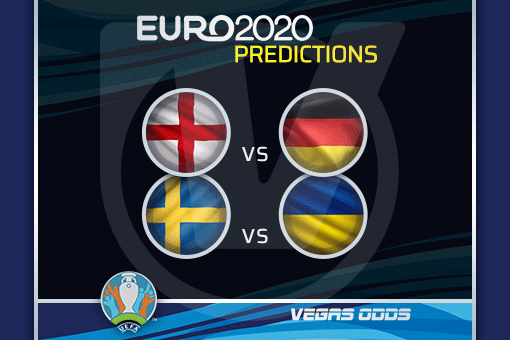 The best possible way to close the round of 16 is to have two former world champions going after one another. It is even better if those two teams are England and Germany. In that case, the whole event gets a totally different dimension.

Also, we have a clash between Sweden and Ukraine afterward. There is less hype around it, but we sincerely believe that it will be an equally interesting match.

The English team advanced to the elimination round without allowing a single goal in the group stage. After beating Croatia 1-0, then playing 0-0 against Scotland, the Three Lions secured first place in the assembly with a 1-0 triumph over the Czech Republic.

We aren’t very thrilled with the way Gareth Southgate’s side played in either of these events. England has a marvelous defense, but their midfield is way below that level. The Three Lions are without a playmaker, and as much as we like Jack Grealish, he isn’t elite, whether you like that or not.

As expected, they play ultra-defensive football, with the last five games seeing one or no goals.

The Germans had one loss, win and draw in the group stage, not shining as well. Apart from trashing Portugal with 4-2, Joachim Low’s side was not that convincing, even though they had usually had the initiative on the field.

The problem is the attack, as Germans’ finishing is relatively poor. At the same time, the defensive unit is not as strong as before, and keeping just one clean sheet in the last six games says pretty much enough.

We don’t see England winning during the regular 90 minutes, which is why our betting suggestion here would be to take a double chance, Germany or draws.

Two completely different styles will clash here – Sweden plays very rigid and dull football, and Ukraine, one of the nicest surprises in this EURO.

The Swedes won Group E ahead of Spain, defeating Slovakia, 1-0, playing 0-0 with the Red Fury, and beating Poland in the final match, 3-2. It was their eighth match in a row without a loss, and in six of them, Blagult kept its net intact.

As for Ukraine, Andriy Yarmolenko and Roman Yaremchuk slash and bash all the rivals upfront. Ukraine lost two games and beat only North Macedonia in their group, but the way they played earned the sympathies of all the football fans.

They often both score and allow goals, which tells you enough about the style of play legendary Andriy Shevchenko prefers. Sheva, one of the best strikers ever, wants his team to play fast and flamboyant, and so far, Ukraine did that.

After a deep analysis of this game, our tipster crew decided to side with Ukraine and its advance to the next stage. They play better, faster, and have players who can respond to Sweden’s physical approach.