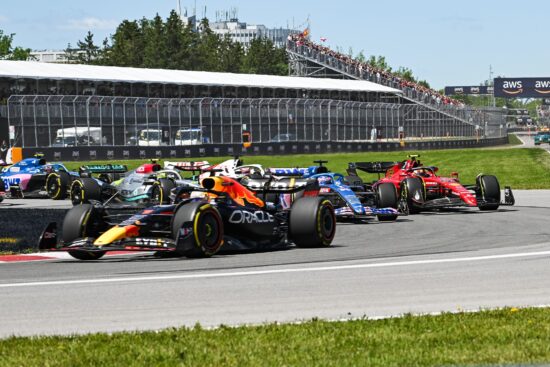 The Formula 1 action once again returns to Europe at the beginning of July, as the British Grand Prix is staged at Silverstone. There was no shortage of drama at the Canadian Grand Prix, but ultimately, Max Verstappen was able to hold off the challenge from Carlos Sainz to take the top spot and extend his championship lead.

There are few more historic races on the Formula 1 calendar than the British Grand Prix. The race is the oldest on the F1 calendar, having first been completed in 2011. Silverstone hosts the race, as drivers compete over a total distance of 306.198 km. A total of 52 laps are completed in the race, with drivers having to navigate 18 corners. There are two DRS detection zones for overtaking, while the Speed Trap is located between corners 14 and 15.

British star Lewis Hamilton holds the record for most victories in the race, as he has won the British Grand Prix on eight occasions. Last year was his most recent success, which also involved a dramatic collision with Max Verstappen at Copse Corner. Ferrari is the most successful constructor with 16 victories. However, Mercedes have won eight of the previous nine editions of the race.

Max Verstappen is the clear favorite in the betting to claim his first-ever victory in the British Grand Prix. Red Bull hasn’t won this race since Mark Webber took the chequered flag in 2012. Verstappen extended his championship lead to 46 points with victory in Canada, as he managed to hold off a late charge from Carlos Sainz. Just a second separated the two for the final 15 laps after a safety car, but Sainz couldn’t get close enough to attempt an overtake.

It was more frustrating for Ferrari teammate Charles Leclerc, as he took a grid penalty and started from the back row. Leclerc once again had to overcome Ferrari’s mistakes, including a very slow pit stop, but he would have been delighted with eventually taking fifth. Fernando Alonso had started on the front row for the first time in ten years, but the Spanish driver eventually finished down in ninth.

Red Bull’s Sergio Perez had a day to forget as he retired with an engine problem inside the first ten laps. However, Mercedes may be back in contention for the Constructors’ Championship. Despite claiming that his car was ‘so bad’ earlier in the weekend, Lewis Hamilton managed to finish third and just seven seconds behind the leaders. Mercedes still has a long way to go, but reliability seems a strength, with Hamilton and George Russell finishing in the top four.

Mercedes had earmarked the British Grand Prix as a potential date to get their car up to speed with the leaders. We would be willing to take a chance on Hamilton finishing on the podium, but it remains hard to see the seven-time champion getting close enough to Max Verstappen’s Red Bull.