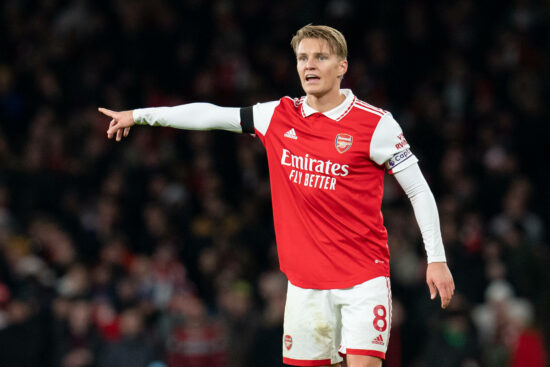 If you’re looking for the latest FA Cup predictions and odds for Man City vs Arsenal, look no further than Vegas Odds.

Two Premier League title rivals – Manchester City and Arsenal – clash in the 2022-23 FA Cup on Friday, January 27. Both teams are playing excellent soccer lately, and both have a clean bill of health. Knowing this, it’s only logical to assume that we’re going to witness a real spectacle at Etihad Stadium.

Man City vs Arsenal duels are always fun to watch. There were a total of 15 goals in their last five meetings, which accounts for 3.0 goals per game on average. And Erling Haaland did not play in any of those – the FA Cup clash on Friday is going to be the first Man City vs Arsenal game for the Norwegian scoring machine.

Haaland, who’s the leading scorer in the Prem with 25 goals in 19 games, is going to pose the most serious threat to Arsenal’s goal. The Gunners, of course, aren’t defenseless, but their real power comes from fighting back. With players like Bukayo Saka, Martin Odegaard, Gabriel Martinelli, and others, they’ve already scored 45 goals in the Premier League – second only to Man City.

In the FA Cup, they’ve played one game so far, routinely beating Oxford United 3-0 on the road. Meanwhile, Manchester City had a much tougher challenge on their hands, but they did even better – they demolished Chelsea 4-0.

This, however, doesn’t mean the Gunners haven’t faced some real giants of English soccer over the last couple of weeks. On the contrary, in their previous four Premier League games, they played (and won) against teams from the Top 6 – Manchester United, Tottenham, Newcastle, and Brighton.

Since the start of 2023, Manchester City have played six games, scoring a total of 13 goals along the way. Four of those were scored by Riyad Mahrez and four by Erling Haaland. We think one of those (or both) will put one away on Friday.

Still, if we had to go with just one, we’d pick Haaland. It’s because the 22-year-old has been incredible this season, scoring 31 goals in all competitions. Plus, he’s coming off a brilliant performance against Wolves last Sunday, when he scored his fourth hat-trick in the Prem.

Of their last 25 home games in all competitions, Manchester City won 21. They also won each of the last six Man City vs Arsenal duels played at Etihad Stadium. Sure, the Gunners haven’t been this strong in years, but their No. 1 priority in the 2022-23 season is the Premier League.

They already got 14 FA Cups in their trophy cabinet – more than any other team in England – with their most recent win happening in 2020. It’s a whole different story when it comes to the Premier League, where Arsenal are without a title since 2004.

Man City are just the opposite. The reigning Premier League champions can’t be too proud of their FA Cup achievements. They got six trophies in the cupboard, the most recent of which they won in 2019 during the treble-winning season.

Knowing all this, it’s clear that Man City have the motivation on their side, which could be the key factor in Friday’s game.