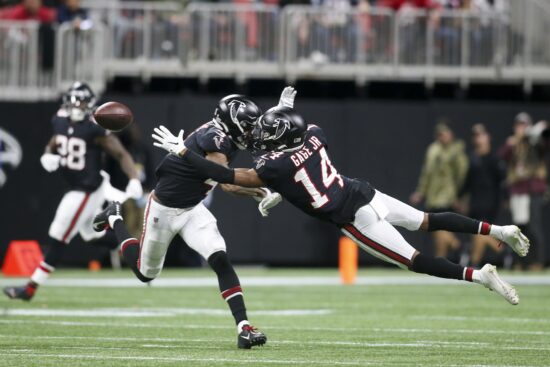 The Jacksonville Jaguars are looking for their third win of the season at the place where both of their 2021 wins happened, TIAA Bank Field. That’s where they will welcome the Atlanta Falcons on Sunday afternoon.

Vegas odds suggest that the visiting team is the favorite, but judging by what we’ve seen from the Falcons this month, the oddsmakers might be wrong.

This team’s lost their previous two games, scoring just three points along the way. Luckily for the Falcons, their opponents haven’t been much better either. The Jags did score more, but they too are coming off back-to-back defeats.

The Falcons Need to Straighten Up Their Offense

Scoring just three points in the two previous games is just horrible, especially because the Falcons do have some pretty decent players in their offensive team. Their quarterback Matt Ryan, for example, is definitely one of the top players in the conference. After all, he’s won the MVP award in 2016 and was a Pro Bowler on five occasions.

Sure, he might be past his prime, considering that he’s already 36, but the guy surely has the skillset to do better. Passing for zero touchdowns and four interceptions in the two previous games is not something you’d expect from a guy with his portfolio.

Still, it’s not Ryan who should take all the blame. The trouble is that the Falcons receivers haven’t been very productive. In fact, Ryan’s favorite target in the 2021 season has been utility player Cordarrelle Patterson, who’s scored five receiving touchdowns so far. That’s how many TDs the Falcons’ two best wide receivers scored combined (Olamide Zaccheaus and Calvin Ridley).

Patterson has been the Falcons’ best player this season, but an injury caused him to miss last weekend’s game, in which his team failed to score a single point. The good news is that Flash is back, which could mean trouble for the Jaguars’ defense.

The Jags Love Playing on Their Turf

The Jaguars are 2-8 on the season, which sounds horrible. Still, that’s two times better than what they did the last season. Obviously, they’re not an elite team, but they seem to be improving. Their rookie quarterback Trevor Lawrence might not be too proud of his stats, but he’s certainly brought more weapons to the Jags’ offensive play.

Further, their defense has had some pretty impressive outings this season. In fact, the Jaguars’ superb defense was the reason why this team won both against the Miami Dolphins and against the Buffalo Bills. They conceded 20 points against the Dolphins while managing to hold the Bills’ offense to just six.

What’s interesting is that both of those wins happened in Jacksonville, which is where this team loves playing. In fact, in most of their home games in 2021, the Jags did not embarrass themselves. Still, their most recent home game saw them getting blown out by the Niners. The score was 30-10 for the visitors.

Overall, the Falcons are a better team than the Jaguars. However, their form has been horrible, particularly in the offense. That said, beating the Jags in Jacksonville isn’t going to be easy, but they definitely have the manpower to do it.