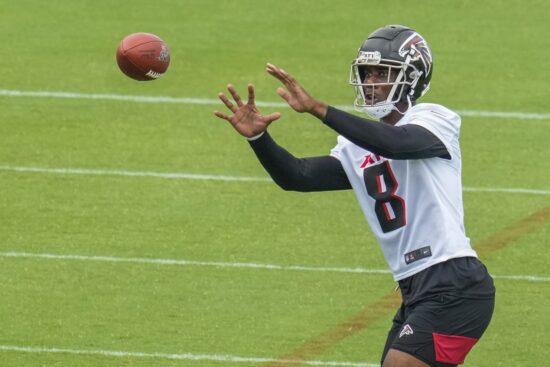 When the Atlanta Falcons selected Kyle Pitts as the fourth overall pick in the 2021 NFL Draft, the Florida Gators product became the highest-drafted tight end in the history of the NFL. After two months of negotiations, Pitts inked one of the most lucrative rookie deals in the league.

On Tuesday, June 29, the 20-year-old TE agreed to a four-year contract with the Atlanta Falcons. For his signature, Pitts will get a sign-up bonus of $21.29 million straight away.

In addition, the Falcons will also pay him $32.9 million that is fully guaranteed.

The deal makes Pitts one of the league’s highest-paid tight ends. In fact, according to Sportac, he is now the TE with the highest guaranteed contract in the NFL.

The Falcons Putting Their Hopes in Pitts

Kyle Pitts would not get such a lucrative contract from the Falcons if he hadn’t already shown his worth. During his college years, he established himself as one of the nation’s best youngsters in the TE position.

While playing for the Florida Gators, he won several individual awards, including the 2020 John Mackey Award (most outstanding TE in NCAA). The same year, he got picked as a unanimous All-American.

He failed to win the Biletnikoff Award (the nation’s best receiver regardless of the position), but he did get to the final stage, which made him the first tight end to do so.

Pitts started his college football adventure in 2018. It was a year later when he had his breakthrough, hauling in 54 receptions for 649 yards. He played 13 games for the Gators that season, winning five touchdowns for his team.

In 2020, he played only eight games due to an injury. Nevertheless, that was enough for Pitts to collect 43 receptions for 770 yards, and record 12 TDs.

Those stats earned him a place in the Atlanta Falcons roster for the next four years (at least).

Pitts Expected to Start for Atlanta in Game 1

Following the departure of one of NFL’s best WRs to the Tennessee Titans, the Georgia franchise might feel week in the receiving department. Although the two aren’t playing at the same position, Pitts is expected to fill in the hole left by Julio Jones.

According to CBS Sports, Pitts is likely to get a starting position straight away. In Week 1, the Falcons are playing the Philadelphia Eagles at home, and are expected to get a win. Oddsmakers see the Falcons as four-point favorites against the Eagles.

That game, however, is one of the not-too-many games where the Falcons are favorites. Online sportsbooks believe that they’re not going to do great in the post-Julio era, with the odds on the Falcons making the Playoffs being as long as +240.

Still, the 2021 Falcons season is expected to be more cheerful than the last one. Oddsmakers have set the margin for Atlanta Win Totals to 7.5 games (out of 17). As a reminder, the Falcons finished 4-12 in 2020.