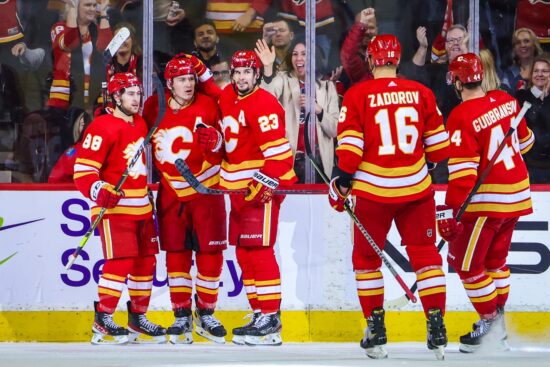 The Vancouver Canucks might end up playing without their third-highest scorer Elias Pettersson in Saturday’s duel with the Calgary Flames. The ‘Nucks would sure love to have him there as they’re taking on the team that’s conceded fewer goals than anyone else in the entire Western Conference.

With 146 goals allowed in 60 games, the Flames have an average of 2.43 goals against them per game. Unfortunately for these guys, the last time they played against Vancouver, they allowed three times their average. It happened on February 24 at Rogers Arena, where we saw the hosts obliterate the Flames 7-1.

Revenge is a dish best served cold, but will we see Calgary exact it? Vegas odds definitely suggest such a scenario is possible.

Injury Troubles Pilling Up for Vancouver

Elias Pettersson, who scored twice in the 7-1 win over the Flames, is listed as doubtful for Saturday’s game. The forward who’s collected 42 points in the 2021-22 season is back in practice according to recent reports. However, we might not see him spend too much time on ice in the next game.

Unfortunately for the Canucks, he’s not their only player who’s struggling with fitness. His fellow Swede Nils Hoglander (forward, 10 points) is also doubtful, while there are six other players who will definitely miss the Flames game, namely:

As you can see, those guys aren’t exactly key Vancouver players. However, their absence has certainly put pressure on other members of the team, who’ve been spending more time on the ice than usual. The result is that some of Vancouver’s crucial men might feel tired, both physically and mentally.

This can explain why the Canucks lost three of their previous four games, including the one played on Thursday evening against the Detroit Red Wings. Despite entering the game as a -141 favorite, Vancouver ended up losing 1-0.

The blowout loss to the Canucks remains the Flames’ worst result of the season. When it happened, it put an end to their superb run of 10 straight wins. The good news for their fans is that the Flames bounce back straight away, destroying the Minnesota Wild 7-3 in the following game.

Since then, their form has been alright, although we did see them lose a couple of times. Truth be told, the last two Calgary losses happened against real NHL heavyweights – Washington Capitals (5-4) and Colorado Avalanche (3-0).

Each time they played against weaker teams, they won. An example of this is the 6-2 win over the New Jersey Devils on Wednesday.

It was a big win for the Flames, but the most impressive fact about that game was that each of Calgary’s goals was scored by a different player. This shows that the Flames are not a one-man army but a team in which every player poses a danger to the opposition.

The blowout loss in the previous duel with the Canucks was a glitch in the Flames matrix. Such, it shouldn’t happen again anytime soon. Actually, we could see just the opposite happening on Saturday at Rogers Place.