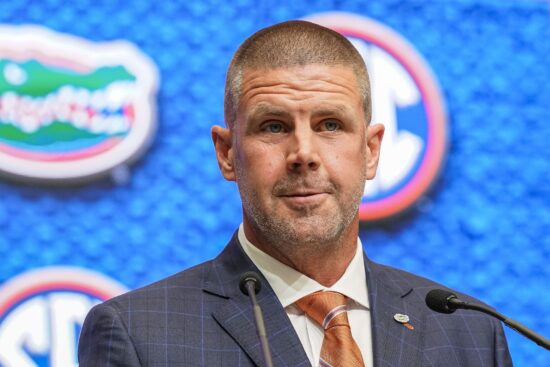 In this article, we are going to look at the NCAAF season ahead and give our Florida Gators predictions for this year and 2023.

The 2021 Florida Gators still made a bowl game (a 29-17 loss to UCF in the Gasparilla Bowl), but it was by all accounts a down season for the UF program. As a result, Dan Mullen was fired mid-season after four years with the team, and now hope springs eternal with Billy Napier’s hire from Louisiana.

Napier isn’t the hire from a big-name school that many Gators fans have come to expect, but at 43 he’s young and hungry and knows how to navigate the new college football landscape with the NIL deals and transfer portal rules. Plus Napier has done a pretty good job of turning around the Louisiana Ragin Cajuns, going a combined 34-5 the last three seasons.

The Gators are still 75/1 to 120/1 to win the 2023 National Championship so there are going to be some growing pains in Napier’s first season with the team. This is still a very dangerous – and exciting – team as we look ahead to the Florida Gators’ season predictions.

Florida used a two-headed monster approach at QB last season and as many fans know – if you have two quarterbacks, you have none. Emory Jones threw for over 2,500 yards last year with 19 TD and 13 INT, but he transferred to Arizona State, paving the way for Anthony Richardson to be the man at QB in 2022/23.

Richardson showed some flashes last year but he’ll have every chance to shine as the full-time signal caller. The 6’4, 237 pro-prospect averaged 7.9 yards per carry last year and threw for six TDs in seven games of split-action. Richardson has a full Spring of taking reps with the first string, and he won’t face a true road test until week four which will give him plenty of time to build up confidence in Napier’s system (which allowed Levi Lewis to throw 20 TDs to just 4 INTs last year at Louisiana).

Richardson will have an experienced group of WRs to throw to as the top six pass-catchers on the depth chart are all upper-classmen. Perhaps most importantly though, Richardson may have a running game to take some pressure off him, with Montrell Johnson coming over with Napier from Louisiana where he averaged 5.2 ypc last year with 12 TDs.

Florida did lose 2021 leading linebacker tackler Mohamoud Diabate as he has transferred to Utah but the team will welcome back 2020 leader Ventrell Miller who tore his bicep last year. Trey Dean III and Rashad Torrence II are both pro prospects in the secondary for the Florida Gators season predictions.

Finally a big advantage the Gators will have this year is their scheduling. Their only true road games are Texas A&M, Vanderbilt, Tennessee, and Florida State while the team doesn’t have to play Alabama. The first three games of the year are in the Swamp in Gainesville so it will give the Gators time to adjust to Napier’s system in front of their home fans.

The Vegas odds season win total is 7.5, but the Gators just might blow that out of the water.