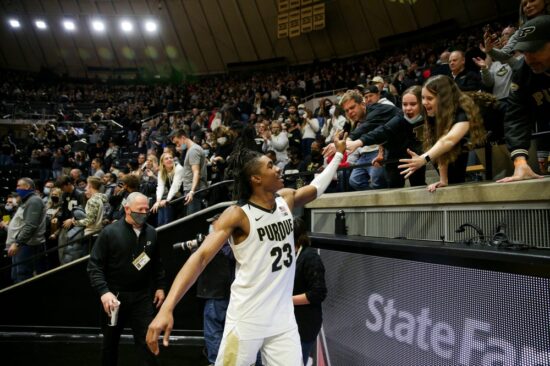 There was an outside chance the Purdue Boilermakers were going to be ranked #1 in the country heading into their ACC/Big Ten Challenge matchup with the Florida State Seminoles. Duke jumped them for the top spot, however, and instead, the Boilermakers will have to settle for #2 as they host FSU as -11 point favorites on Tuesday night.

It’s been quite the start for Florida State, who suffered a 16-point loss at in-state rival Florida in the second game of the year before turning things around to win four straight. FSU had a tough time of it last time out, needing a last-minute tip in to survive Boston 81-80 at home as -19 point favorites.

Florida State is a +11 point underdog on Tuesday night, but even that number seems low just because of the multitude of injuries and absences the Seminoles are going through right now. Starting PG RayQuan Evans will miss this game to grieve for a brother who lost his battle with Leukemia, and FSU’s top two centers Tanor Ngom and Naheem McLeod are both out with injuries.

All three of the absences will hurt, Evans because he is an experienced ball handler as the Seminoles head to play in a hostile environment, and the 7’2″ Ngom and the 7’4″ McLeod obviously because of their size because Purdue is huge down low as well.

That just means that the Seminoles will need more from Malik Osborne and Matthew Cleveland on Tuesday night. They are the only two players averaging in double figures on FSU, and Cleveland’s 17 points last time out were key in avoiding the upset against Boston.

Purdue is the Complete Team

It’s hard to find a weakness on this Purdue team that has gotten to the highest ranking in school history at #2. It seems that somebody different can hurt you every night, as six different players average over 9 ppg, a major reason why the Boilermakers put up 92.3 ppg which is the second-most in the country.

It’s not like Purdue is plowing through inferior opponents and building up their stats either. They already have wins over then #18 North Carolina and then #5 Villanova in the Hall of Fame Tip-Off Classic and have played the 9th hardest strength of schedule in the country heading into Tuesday night’s matchup.

The fact that Florida State is missing a couple of 7-footers really looks like it’s going to give Purdue yet another advantage in this matchup. 7’4″ Zach Edey has already posted 20+ points the last two games, and should get little resistance on the blocks in this game. 6’10”, 265-pound Trevion Williams is all but guaranteed a double-double in this matchup as well.

11 points is a lot to give in the ACC/Big Ten Challenge but this just looks like a Purdue team that is set to dominate this matchup. It would have been tough for Florida State to contend in this one even if they were at full capacity, but the absences McLeod, Ngom, and Evans are a lot to overcome.