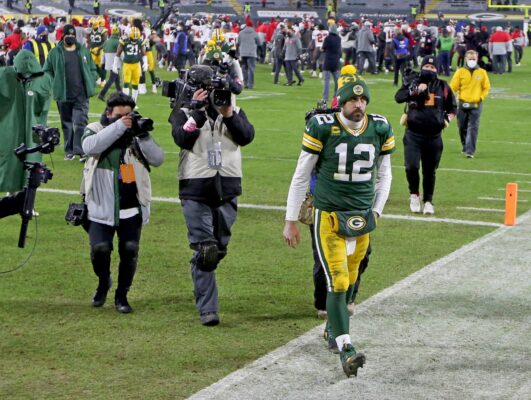 The two-time Super Bowl champion, and a close friend of Aaron Rodgers, John Kuhn, stated that he talked with the reigning NFL MVP, revealing several interesting pieces of information.

While appearing at “Zach Gelb Show,” Kuhn stated that despite all the problems and speculations, he still believes Rodgers might stay in Green Bay.

“I still think it’s somewhere around 70, 75% that Aaron Rodgers is the starting quarterback for the Packers this year.”

His evaluation of the entire situation improved the mood of the Packers’ fans. They are still frightened with the possibility of losing arguably one of the biggest names in their history and the player who was the franchise face over the last dozen years.

Kuhn explained that Rodgers finds himself in a pretty tough place. He knows that time is running out on him, which is why he wants to make a final push in winning the Super Bowl.

After hearing Brett Favre recently, the Packs’ fans were pretty upset. Rodgers’ predecessor at the starting QB position and one of the best players in history stated that he believes Aaron would rather sit out than play if not traded. Besides that, the three-time NFL MVP fired several other pretty terrifying predictions about Green Bay’s future.

However, Kuhn didn’t agree with that, stating that Rodgers is not “cynical” and a “proven Packers brass.” The 38-year old told during the interview that there is a solid opportunity for seeing this unpleasant conflict ending without any consequences for all the parties involved.

Rodgers and Kuhn spoke recently, but the two-time Super Bowl champion (XL with the Steelers and XLV with the Packers) wasn’t willing to reveal the entire conversation with his friend.

Packers in Need of Quarterbacks For Preseason Activities

The voluntary sessions and the in-person work are soon to start, but for now, there aren’t any signals that Rodgers might appear during these activities. Looking back at the future, Green Bay’s leader wasn’t keen on participating in these gatherings, even though he had a $500,000 offseason workout bonus.

In order to have a functional roster and unit, the Packers admitted that they need to add one or more quarterbacks before resolving the situation surrounding their best player. The sources suggest that the franchise from Wisconsin plans to sign at least one undrafted rookie and explore some veteran players on this position as well.

General manager Brian Gutekunst publicly stated on several occasions that he still sees Rodgers as the starting quarterback of the team and as the cornerstone of the entire organization. Therefore, Green Bay isn’t looking for his replacement in any way.

Right now, the Packs have just Jordan Love as the player who might start instead of Rodgers. The sophomore QB was drafted last year in the first round, and his arrival was one of the first significant disputes between Rodgers and Gutekunst.