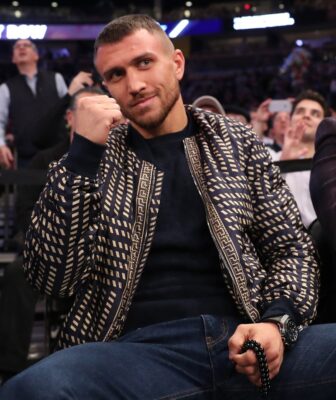 All eyes will be on Las Vegas this weekend for some huge boxing action, as Vasyl Lomachenko looks to avenge the defeat that he suffered at the hands of Teofimo Lopez in June last year. Lomachenko is already plotting revenge on the American, as he admitted that his reasoning behind taking this fight was in preparation for the rematch.

The pressure will certainly be on Vasyl Lomachenko this weekend, as he makes his long-awaited return to the ring. The Ukrainian Olympic gold medallist was last in the ring back in June last year, as he was stunningly beaten by Teofimo Lopez, which inflicted just a second career defeat on the renowned fighter.

The defeat was a pretty convincing one on the scorecards, as they read 117-111, 119-109 and 116-112. The defeat ended a 13-fight unbeaten run, which stretched back to March 2014, but there is a feeling that the defeat has only made the Ukrainian hungrier. Sport is all about responding to setbacks, which makes Lomachenko’s fight this weekend captivating viewing. However, few can see any other outcome than a win for The Matrix. He has won 14 of his 16 professional bouts, while he has won ten by knockout.

Nakatani and Lomachenko both have one very common aspect in common; they have both lost to Lopez in their career. Nakatani’s record on the face of it looks fairly impressive, as he has won 19 of his 20 professional bouts, while he has ended 13 of those within the distance. However, his battle against Lopez was a clear step up in quality.

He was controlled throughout that contest by the American, but it did seem that he learned lessons in that July 2019 bout. He returned to the ring in Las Vegas to win the WBO Intercontinental lightweight title by defeating Felix Verdejo by TKO in the ninth of ten proposed rounds. However, whether he has the ability to compete with Lomachenko this weekend looks extremely unlikely, as there is a clear difference in the skills of both fighters.

Who will win the fight between Lomachenko and Nakatani this weekend:

It will be fascinating to see Lomachenko back in the ring this weekend, as he looks to get over just the second career defeat that he has suffered. Nakatani will need a very comprehensively game plan to cause an upset, but we find it hard to see any other outcome than Lomachenko having his arm raised.