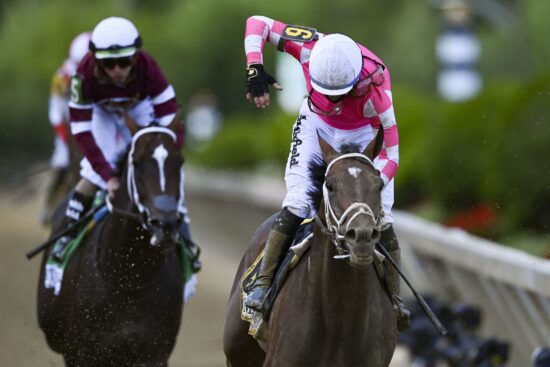 It has been an action-packed year of Triple Crown races in the United States, but the third, and final race of the series takes place this weekend at Belmont Park, as the Belmont Stakes takes centre stage. But, which horse will claim the win in the huge Grade 1?

Essential Quality for trainer Brad Cox will be back at the top of the market on his return to the track. The Breeders’ Cup Juvenile winner lost his perfect record at the Kentucky Derby, as he could finish in just fourth. Connections decided to bypass the Preakness Stakes in favour of this race, and he remains a leading contender on his return.

Hot Rod Charlie finally managed to get the better of Essential Quality in the Kentucky Derby, but that still only meant a third-place finish. The Louisiana Derby winner is a very short price this weekend, which could put off a lot of gamblers. Rombauer will also come into this with very short odds, which would have appeared unthinkable before the Preakness. However, a commanding victory in the second Triple Crown race means that he is good value, and should he have a straightforward ride, he will be among the first to finish.

Rock Your World was another that lost his perfect record at Churchill Downs, but John Sadler will be hoping that he will be able to bounce back. The same can also be said of Known Agenda, who finished eleven lengths behind Medina Spirit. Bourbonic also ran in the Kentucky Derby, but finished 16 and a half lengths behind the eventual winner.

France Go De Ina remains an unknown quantity in this race, but could be open for improvement. Brooklyn Strong, Overtook and Weyburn have the most to find based on their recent performances, and it looks unlikely they will have enough class to win the Belmont Stakes.

Jody Demling was correct in predicting the winner of the Belmont Stakes last year, as he correctly tipped that heavy-favourite Tiz The Law would run well clear. He had tipped up Highly Motivated for the Kentucky Derby earlier in the season, but the three-year-old finished way back in tenth, eleven lengths behind Medina Spirit.

One big surprise from Demling is that he doesn’t see Rombauer backing up his Preakness Stakes win with a second straight Triple Crown victory. He has also talked up the chances of Rock Your World and Hot Rod Charlie, according to CBS Sports.

Before making a bet, it is also important to look at some of the trends that could help find a winner. These are some of the most important pointers to consider for this weekend’s race:

Who will win the Belmont Stakes this weekend?

We were very high up on the chances of Rebel’s Romance this weekend. However, he has since been pulled out due to a leg problem. Therefore, we are willing to back Rock Your World, who was a very impressive wire-to-wire winner before the Kentucky Derby. Hot Rod Charlie is another horse that I am very high up on.