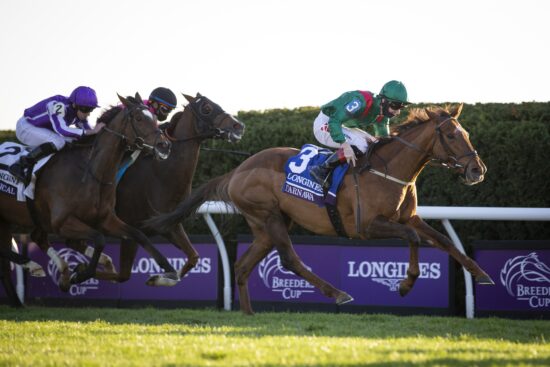 While the Breeders’ Cup remains one of the most illustrious events on the horse racing calendar, it is hard to argue against the importance of the prestigious Prix de l’Arc de Triomphe. The Group 1 race is the second most lucrative race on the calendar and is the top-rated turf race on the international calendar. You can find the latest Arc odds and more information about the runners here.

The Vegas Odds for the Prix de l’Arc de Triomphe aren’t released until Sunday morning. However, the latest offshore odds for the Group 1 race can be found below.

The draw for the Prix de l’Arc de Triomphe was made earlier in the week. The draw in full can be found below:

Given the quality that will be involved in the Arc this year, bettors will need to read through all the key trends that help identify a winning runner. Some of the key trends to consider can be found below.

Luxembourg will likely be sent off as the favorite for the Arc this weekend, for trainer Aidan O’Brien. He has won five from six starts this season, with his only defeat coming in the 2000 Guineas.

Both of his previous starts have come over a mile and two furlongs, most recently beating Onesto in the G1 Irish Champion Stakes. However, his lack of experience over this distance is a concern, while Enable is the only horse in the previous six editions to have won the Arc aged three.

One of my biggest fancies for the Arc this weekend is Alpinista. The five-year-old mare has been sensational on both starts that she has made this year, with both coming over a mile and four furlongs. The latest of those scored an RPR figure of 121, as she beat Tuesday by a length in the G1 Yorkshire Oaks at York.

Her record over this distance is outstanding, as she has claimed victories on each of her seven starts, while he has placed on all nine career efforts. She is a massive player this weekend, and I’d be shocked if she doesn’t go off as the favorite.

The story of the Arc last year came in the form of Torquator Tasso for Germany. This runner was the strongest of the finishers at a rain-drenched Longchamp as his experience on the heavy ground came to the fore. It was a shock victory, as he was sent off at odds of +7200, and he was the quickest home, beating Tarnawa by three-quarters of a length.

Three of his four runs this season have come over this distance, but he has recorded just a single victory, with his latest effort scoring an RPR rating of 117. However, if the expected rain comes, it brings him back into contention.

Dark Horses For The Arc

Due to the immense quality involved in the Arc, there is value everywhere in the betting. One price that immediately catches the eye is Mishriff at +2800. The multiple Grade 1 winner has endured a pretty disappointing campaign, as he has finished second twice and third once in four starts. His latest run over this distance came at Ascot in July, finishing third in the G1 King George and Queen Elizabeth Stakes. But, he remains an extremely high-quality contender.

It’s worth having a few plays in the Prix de l’Arc de Triomphe this year, as it is a very open race. The first choice is Alpinista, who has bags of experience and class over this distance. Meanwhile, each-way gambles will also be taken on Sealiway and Broome.

Sealiway will be one that relishes the testing conditions and excelled over this course when fourth last year. Meanwhile, Broome is an astronomical price for a contender that has already won in Grade 1 company over this distance this year. His second over this course and distance last year in September also bodes well for his chances, and the draw has been beneficial for a strong bid this year.