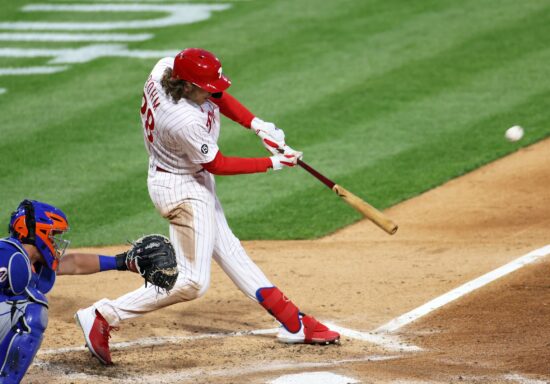 It is the rubber game of the three-game series after the clubs split the first two games. New York came away with a 5-4 victory last night after an awful out of the baseline call against Philadelphia in the seventh inning. Michael Conforto homered in the ninth to give the Mets the victory.

The Mets and Phillies will battle on Sunday Night Baseball for first place in the NL East. New York will send David Peterson (1-3, 5.39 ERA) to the mound to face Zach Eflin (1-1, 3.58 ERA) for Philadelphia.

New York was sitting in first place at 6-2 to start the season and feeling pretty good about themselves. It has been a struggle since then with the offense going ice cold.

The team has combined for an OPS of .669. The team has only hit 16 home runs through 21 games and has a slugging percentage of only .352. No one besides Pete Alonso has more than two home runs.

Peterson has been better than his ERA would indicate through four games. He has thrown 19 ⅓ innings allowing 18 hits, six walks, and 12 earned runs. He has a WHIP of 1.24, has given up four homers, and struck out 21.

Mets hitters have had decent success against Eflin. They have combined for 113 plate appearances and an OPS of .762. Kevin Pillar, Alonso, and Conforto all have OPSs above .900 against Eflin with at least one home run.

Philadelphia is 9-5 at home and have only lost one series at Citizens Bank Park all season. They will look to continue that trend and take two of their three series against the Mets this season.

Eflin will look to bounce back from his worst start of the season in the last outing against St. Louis. He went 6 ⅔ innings allowing nine hits and five earned runs.

Eflin has thrown 32 ⅔ innings this season, allowing 33 hits and only two walks while giving up 13 earned runs. He has a WHIP of 1.07 and has given up three home runs while striking out 27.

Philadelphia hitters have had their way with Peterson in the past. They have combined for an OPS of 1.163 in 39 plate appearances. Rhys Hoskins leads the way going 2 for 5 with two home runs off of Peterson.

Mets vs Phillies Prediction and Pick

I look for Philadelphia to take the series and continue the Mets skid. Phillies hitters have had a lot of success off of Peterson, and I look for that to continue.

Eflin has been good this season, and this Mets offense cannot hit off of anyone right now. I do not see New York putting up more than three runs, which will not be enough.