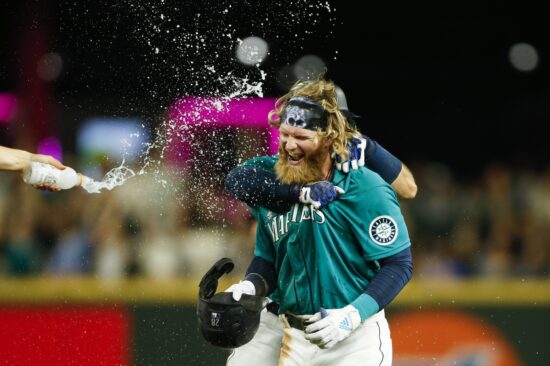 A pair of American League West Division rivals will meet up again on Saturday night to continue their weekend series. The Seattle Mariners won the opener of this series against the Texas Rangers, and the hosts have been a much better team this season.

Texas is just 32-50 on the season, and they are currently in last place in the division. The Rangers will be sellers at the Trade Deadline, and that will hurt the roster even more.

Seattle comes into Saturday night with a record of 44-39, and they have also won three straight games. The Mariners have climbed into third place in the AL West and are just 6.5 games out of first place.

Texas has the ability to put up some runs at the plate, especially when they are playing at home. Pitching has been a problem for this team for much of the season, and that could come into play on Saturday night.

Jordan Lyles starts for Texas on Saturday, and he is 3-5 with a 5.12 ERA this season. Lyles will have to pitch well to keep his Rangers team in this game and give the offense a chance to take control.

Joey Gallo leads the team with 20 home runs, and he has been swinging a hot bat of late. Adolis Garcia has driven in a team-high 55 runs for the Rangers, and this team can wear down an opposing pitching staff.

Offense A Struggle For Seattle

Seattle has scored 21 total runs in their last three games, but this team has not always been great at the plate. The Mariners are hitting just .220 as a team, and they also have an on-base percentage of just .294.

Third baseman Kyle Seager leads the team with 48 RBIs, and he could be a player that gives other teams some trouble. Seattle is trying to introduce some young talent into the everyday lineup, and that has created some holes.

Marco Gonzales makes the start for Seattle on Saturday night, and he has gone just 1-4 with a 5.10 ERA so far this season. Gonzales is one of the top pitchers in the Mariners rotation, and Seattle needs him to start pitching better.

Seattle is the much better team in this matchup, and they are also playing well at this time. The Mariners will pick up a second straight win in this series against their NL West rival.