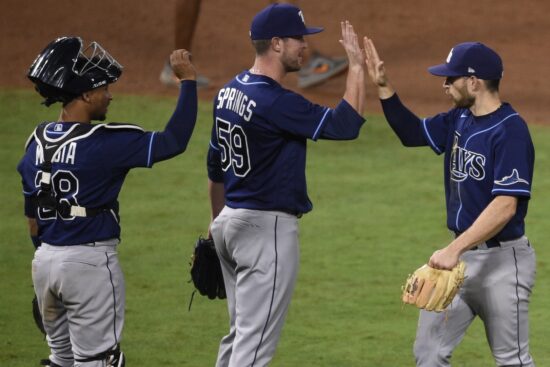 Tampa Bay will look to pull off the sweep of Los Angeles after winning the first three games of the series. The Rays won 3-1 last night behind a Brandon Lowe three-run home run. Shohei Ohtani continued to impress, going five innings allowing only one hit while striking out seven. Junior Guerra gave up two hits, a walk, and the three-run homer getting only one out.

Neither team will be sending their best starting pitcher to the mound in the finale of the four-game series. Collin McHugh (0-1, 10.13 ERA) takes the mound for the Rays and Andrew Heaney (1-2, 5.25 ERA) for the Angels.

Tampa Bay Has Won Four In a Row

After being under .500 most of the season, Tampa Bay has won four straight to move two games above .500. They have won all three games against the Angels after taking the last game in their series against Houston.

Both the Rays pitching and hitting are pretty middle of the road. Tampa Bay has combined for an OPS of .681 as a team. Joey Wendle leads the team with an OPS of .814.

McHugh will be making his first start of the season. He has thrown 5 ⅓ innings allowing 12 hits, 1 walk, and 6 earned runs. He has a WHIP of 2.44 and has struck out 5.

Tampa Bay hitters have had success against Heaney in the past. They have combined for an OPS of .809. Austin Meadows is 3 for 5 with a double and a home run.

Angels Limping into May

The Angels have lost four straight and six of eight to fall into last place in the AL West. They are currently 4.5 games back of the Oakland Athletics for first place.

Los Angeles offense has done their part, behind another MVP-caliber season by Mike Trout. Trout has a slash line of .398/.514/.761. He has hit 8 doubles and 8 home runs and is having his best season to date.

Jared Walsh and Shohei Ohtani are off the all-star quality starts as well. Walsh has an OPS of .988, and Ohtani is at .938. Ohtani leads the team with 9 home runs.

Angels hitters have done plenty of damage against McHugh. They have combined for an OPS of .879. Mike Trout is 8 for 24 with 2 doubles, a triple, and a home run off of McHugh.

The Angels are a slight favorite, and they should be with Heaney on the mound. His numbers indicate he is much better than a 5+ ERA pitcher. I like the Angels at -125.