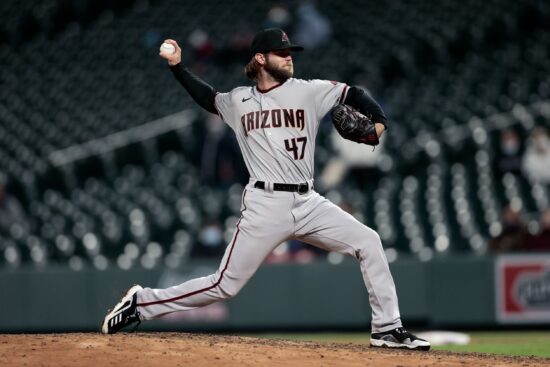 The Arizona Diamondbacks hope to win a second straight against the Colorado Rockies at home tonight. On Tuesday, the D-backs defeated the Rockies 10-8 in extra innings. Ketel Marte had three hits for Arizona, and Christian Walker and Stephen Voght homered in the victory for Arizona.

Third baseman Ryan McMahon did the majority of the heavy lifting for the Rockies, going deep three times. McMahon collected 14 total bases in the loss.

Bumgarner A Shell Of His Former Self

It feels like just yesterday; Madison Bumgarner was one of the most feared pitchers in all of baseball. Now, the four-time All-Star has become a major burden, both financially and performance-wise, for the D-Backs.

Last year, Bumgarner was one of the worst starting pitchers in all of baseball, owning an ERA of 6.48 over the course of nine starts. On Opening Day this year, the 31-year-old lefty got torched by the Padres, allowing six runs in four innings.

With MadBum on the mound tonight, Colorado will counter with right-hander Antonio Senzatela. Best known for being a pitcher that generates a lot of groundballs, Senzatela was lit up by the Dodgers in their second game of the season. The Venezuelan native lasted only 3.1 innings, allowing nine hits and seven earned runs.

After surprising the Los Angeles Dodgers on opening day with an 8-5 victory, Colorado has now dropped four straight. There’s no doubt that the loss of Gold Glove third baseman Nolan Arenado will affect Colorado’s record drastically in 2021, but it’s the Rockies pitching that is the real concern.

Bud Black’s club comes into this one with a team ERA of 5.69 and WHIP of 1.73. Charlie Blackmon and Trevor Story still lead a top-10 offense coming into this one, but you’re not going to consistently win ball games in a slugfest.

Arizona is currently batting .225/.275/.387 on the season. Luckily for the D-backs, Christian Walker and Ketel Marte both have had success against Madison Bumgarner in the past, hitting over .500 against the former Giants ace.

These are two teams that are hard to bet on and will surely both end up in the basement of the NL West, which is dominated by the Dodgers and Padres.

Factor in two struggling pitchers and a hitter-friendly Coors Field? Get ready for a ton of runs in this one.