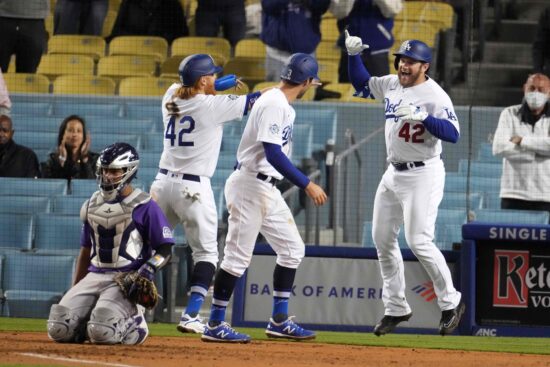 The Dodgers and Padres will battle in the most anticipated series of the 2021 MLB season. Los Angeles has looked every bit the part of the best team in baseball so far this season. The Dodgers +34 run differential is easily the best in baseball.

San Diego has been good as well. The Padres run differential of +17 is third in the National League and fourth-best in all of baseball.

The Dodgers are coming in red hot. They have won six in a row and 11 of their last 12. They have given up only 12 runs during the six-game winning streak.

The Padres split a four-game series with the Pittsburgh Pirates after sweeping the Texas Rangers. San Diego’s offense should get a boost with Tatis Jr. returning from the IL.

Walker Buehler (1-0, 1.50 ERA) will be making his third start of the season. In his 12 innings, he has allowed ten hits with no walks and eight strikeouts.

The Dodgers have never faced San Diego starter, Ryan Weathers. Los Angeles has not been nearly as good against lefties with a team OPS of .753. Justin Turner has crushed left-handed pitching this season with a slash line of .467/.529/1.067.

San Diego’s pitching staff has combined for an ERA of 2.38 and a WHIP of 1.03. Weathers (1-0, 1.50 ERA) will be making his first start of the season after coming out of the bullpen for three appearances.

San Diego has struggled against Buehler in past meetings. They have a team OPS of .515 in 42 plate appearances. Trent Grisham is 2 for 3 with a homer of the the young right-hander.

Weathers is not stretched out, so it will be a bullpen game for San Diego. Weathers have been very effective, but three innings is probably the max he can go.

The Dodgers have not hit lefties nearly as well, so Weathers should have some success if he can avoid letting Turner beat him. Look for Adrian Morejon to get a lot of work this weekend as well to see if the Dodgers’ struggles against left-handers continue.

I like the Padres on the five-inning line if you can get them at +140 or better. I like the Dodgers for the full game and the under eight as both pitching staffs have been lights out of late.