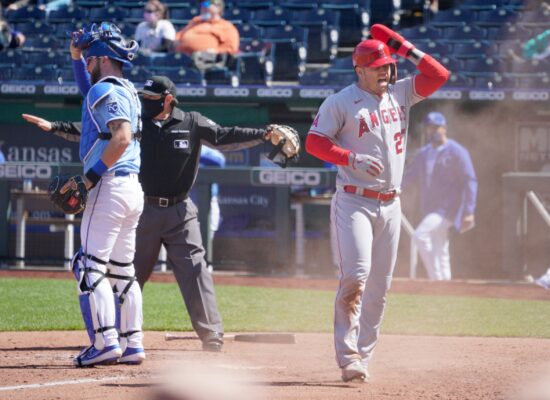 The Minnesota Twins were happy to break their five-game losing streak when they finally snagged a win against the Boston Red Sox on Thursday. Before that, the Twins looked like one of the worst teams in baseball. Minnesota had a solid record to start the season but, over the course of two series, saw their 5-2 season slip to 6-7.

Friday, the Twins face the Los Angeles Angels, who are on a losing stretch of their own but still have an over .500 record. Los Angeles has suffered two straight losses to the Kansas City Royals, both with uncharacteristic performances. Pitcher Andrew Heaney will start the game versus the Twins but will his pitching hold up to the Twins power hitters?

Both of these teams desperately need to get a winning streak going, but who should you take at the sportsbook on Friday? The 5-7 Minnesota Twins on the road? Or the 7-5 Los Angeles Angels at home?

Twins steal a win against Boston after a long losing streak

The Minnesota Twins haven’t been able to create much excitement in the form of runs over the last six games. Had it not been for RF Max Kepler’s walk-off single, the Twins would’ve likely lost their game to the Red Sox on Thursday. These struggles in the batter’s box have led to the Twins’ recent losing streak, which they only recently broke. Against a team like the Los Angeles Angels, who have an average ERA of 4.88, the Twins can get a boost in their runs column.

A very interesting trend to note is how well the Twins play against the spread on the road. At this point in the season, they have a 4-2 ATS record. Considering how poorly the Angels have played recently, this could boost your confidence in the Twins. The only concern I have is whether Byron Buxton will be suiting up for the Twins on Friday. He’s one of their best hitters with homerun potential, and if he sits out, the Angels could stall out the Twins batting.

The Los Angeles Angels lost two in a row to the Kansas City Royals but can get back on track against a struggling Twins team. The Angels have played well at home with a 4-2 home record, but the only concern is Andrew Heaney at the starting pitcher position. Heaney has an ERA of 7.00 and is 1-1 in two starts.

Los Angeles is a fairly average team to bet on; they have a 6-6 ATS record, which, although not spectacular, it’s at least .500. At home, the Angels are the more sure bet on Friday night, even with subpar pitching.

The Angels have played really well at home and will look to get the start to their season back on track against the Twins. Minnesota has had trouble putting runs on the board, and the Angels will be able to exploit their lack of batting on Friday night.