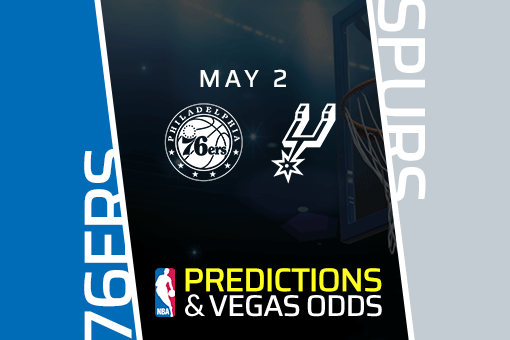 The 76ers hope to regain the top spot in the East, knowing that the Nets and the Bucks have back-to-back clashes in the upcoming days.

As for the Spurs, Gregg Popovich’s team has undoubtedly the toughest schedule until the end of the season, meaning that their 10th place might be in jeopardy.

Three in a Row Bring Positive Mood in Philly

Following a four-game slump, the 76ers lost to Warriors, Suns, and the Bucks, losing the top spot in the conference, Doc Rivers’ team bounced back. Right now, they have three consecutive victories, one against the Thunder and two against Atlanta Hawks.

In the most recent clash with the team from Georgia, the 76ers posted an easy 126-104 victory. The key moment of the match happened in the second period, once Philly outscored the rivals by 22 points, 42-20.

Dwight Howard had a superb night with 19 points and 11 boards in 17 minutes. Harris, Embiid, and Simmons had 18 points each, while Shake Milton added 13 off the bench.

After winning five in six, the Spurs narrowly lost the last two games. The first one was in Miami, 116-110, and the second in Boston against the Celtics, 143-140. This was arguably one of the worst defeats in the Spurs’ history as they dropped a 32-point lead created during the first half.

Many are wondering how big is this hit on the players’ morale and what the consequences are. Keeping in mind that the Spurs have to face Jazz (twice), Blazers, Nets, Knicks all on the road in the next few days, the future doesn’t look very bright for the franchise from Texas.

DeMar DeRozan had 30 points and 14 assists against the Celts. Dejuonte Murray and Lonnie Walker IV scored 24 each, while Rudy Gay added 16. Jakob Poeltl posted a double-double with 15 points and ten boards.

76ers vs Spurs Head to Head

Spurs lost to 76er in Philadelphia midway through March, 134-99. They didn’t have DeRozan and LaMarcus Aldridge in that one, which was too big of a handicap for Popovich’s side. Derrick White and Drew Eubanks, with 17 points, led the guests in that one. Tobias Harris had 23 points, nine boards, and seven assists, while Seth Curry scored 21.

The guests are -5.5 point favorites, which is reasonable, having in mind the way they play lately. Even though this is one of the most important games of the year for San Antonio, we strongly believe that they can’t defeat the 76ers, who are a much better and deeper team. Also, in all the vital matchups on the court, Philly has a massive advantage.