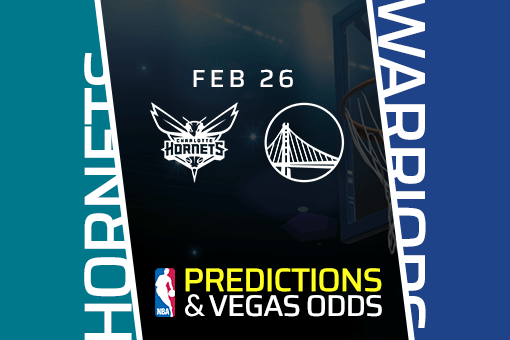 The Hornets are seventh in their conference, while on the other side, the Warriors occupy the eighth spot on the West. Both teams are under tremendous pressure of winning in each match because one victory could be decisive at the end of the year when it comes to their playoff ambitions.

Regarding the form, both the Hornets and the Warriors are inconsistent. Seeing them winning or losing in series is very rare.

Charlotte In the Middle of the Tour

The match against the Warriors will be the third on a six-game journey through the West for the Hornets. The previous two saw them losing to the Utah Jazz, 132-110, and defeating the Phoenix Suns, surprisingly, 124-121.

Malik Monk scored 29 points off the bench in Phoenix. LaMelo Ball had 20 and 8 assists, while Gordon Hayward added eight boards with the same efficiency as Ball. The Hornets had a 17-point lead in this one, while the Suns led 11 points, which tells you how interesting this match was.

After having a scoring spree recently, and four events with 30+ points, Terry Rozier dropped just 10 points against the Suns while playing a team-high 36 minutes. He was 3-for-11 from the field and had six boards and four assists.

Two in A Row For The Warriors

Friday’s contest against the Hornets is a short break for the Warriors, who had four matches on the Eastern Conference tour, before hitting the road for another four games. This time, the opponents are going to be much tougher, and that is why Steve Kerr’s guys need to beat the Hornets.

The Warriors won two in a row against the Knicks 114-106, and the Pacers, 111-107. In both of these matches, Draymond Green had team-high assists and rebounds, with the veteran also contributing in defense very well.

Believe it or not, against the Pacers, Golden State scored just five three-pointers in 26 shots, which is one of the worst shooting performances of the Dub Nation in a long time. That is with Steph Curry on the floor.

Hornets vs. Warriors Head to Head

Hornets defeated the Warriors on Saturday, 102-100, after a finish that saw Draymond Green receiving two tech fouls pretty late. Terry Rozier scored from the foul line, and after that, delivered a dagger to seal the home team’s victory with the time expiring.

Who will win in tonight’s NBA game:

Golden State is a six-point favorite, but we would avoid betting with the spread involved. It is much better to go just with the Golden State’s victory, even though the odds bring far less profit.