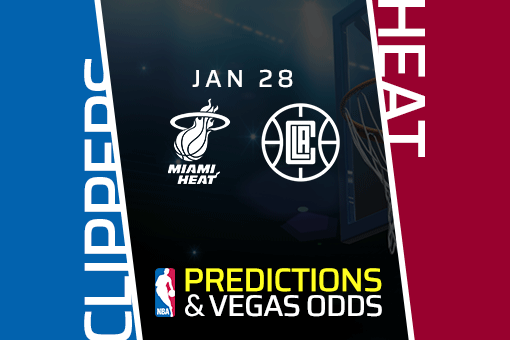 The Los Angeles Clippers and Miami Heat couldn’t be in more contrasting form coming into this game on Thursday evening. Miami will be looking for an upturn in form to increase their chances of a playoff finish, while the Clippers will be looking to maintain their winning run to have the best chance of finishing as the top seed in the Western Conference.

Everyone expected the Miami Heat to kick on this season after reaching the NBA Finals last season. However, their form this season has been more than disappointing. The Heat have won just six games all season, with just half of those wins coming in their last ten games. Due to the competitive nature of the Eastern Conference, they aren’t out of the playoff picture just yet, but they will need to improve their form quickly to give themselves the best chance.

Miami had won their last three ahead of a clash with the Denver Nuggets, with those defeats coming against the Toronto Raptors, and back-to-back losses against the Brooklyn Nets. Worryingly, the Heat scored just 85 in the second of their defeats against the Nets, which marked the second game in three that they failed to reach the 100-point mark. Bam Adebayo has led the team in terms of average points per game this season, as he has averaged 20.7, while the same star also leads the team for rebounds and assists.

The Los Angeles Clippers look a real team this season, and are more than capable of winning the NBA Championship. The consistency that they lacked last season is evidently there this term, as they have won 13 times already. They are a team that don’t lose many games, as they have been beaten on just four occasions. Clippers are currently on the second-best winning run in the NBA, as they have won seven on the bounce; only the Utah Jazz, who have won eight on the bounce, have won more.

Los Angeles continued their winning run with a 108-100 success against the Oklahoma City Thunder over the weekend, with Kawhi Leonard scoring 34 points. That took the two-time Finals MVP points per game average for the season to 25.9 points. Leonard has also averaged 5.7 assists per game this term, and 2.0 steals per game. Serge Ibaka has instantly made a telling contribution following his arrival from the Toronto Raptors, as he leads the Clippers for rebounds and blocks.

The form is the biggest giveaway for gamblers making a wager on this game, as the Clippers are winning games at ease, while the Heat are struggling to drag themselves up the standings in the East. That pattern will continue.