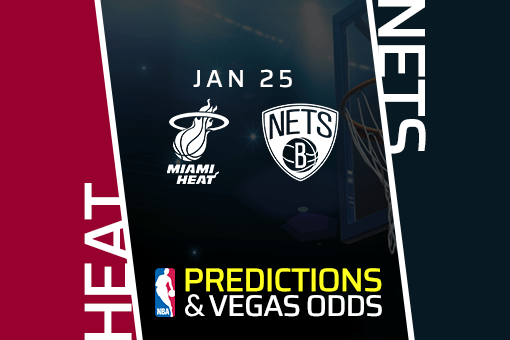 Two contenders for winning the Eastern Conference will clash this Monday night at Barclays Center. The Miami Heat want to win and erase the loss from two nights ago, as well as to regain some of the lost morale in the last few weeks.

Injuries, a tough schedule, and a couple of bad performances hurt their locker room. Meanwhile, the Nets won their first game with all three superstars in the lineup. After the opening two losses, in which Kyrie Irving came back and scored 75 points combined, Brooklyn’s confidence grew.

The big center had 41 points two nights ago, and leads the team with 20.3 buckets per game. Adebayo is among the top five players in the league in ISO scoring, adding 8.9 boards and 5.5 assists, with 61.7% while shooting from the field. He is slowly making his way as one of the elite players in the league.

With Jimmy Butler, Tyler Hero, Avery Bradley, and several other players unavailable, Adebayo needed to step up, which he did. Though, the Heat are 6-9 with two losses in a row, one vs. Nets and the other vs. Raptors. The two matches saw completely different sides of this team, as they dropped 81 points against the Canadian team and 124 once meeting the Nets.

The Heat was terrible from downtown, hitting 13 of 46 attempts, and they didn’t have a single lead throughout the entire match.

With Irving back in the court, the Nets need to have a deep and thorough soul searching. Uncle Drew immediately took a major share of the shots, but his team lost against the Cavaliers in two straight games.

With him, Durant, and now Harden, Steve Nash will have plenty of options in attack, but also a lot of headaches when it comes to picking the actions. It seems that both Durant and Harden worked well together, and that if some problem comes up, Kyrie will be the cause for the same.

Irving had 28 points, seven assists, and six boards in the first game against the Heat. Kevin Durant dropped 31, while Harden became a playmaker with 12 points, 11 assists, and seven boards, taking just eight shots. It is safe to say that the Beard sacrificed the most, giving up his playstyle and subordinating to the team’s needs.

Heat vs Nets Head to Head

The last game ended 128-124 for Brooklyn. We saw the hosts having a double-digit lead most of the time, but allowed the Heat to come back. Luckily for the Nets, Miami didn’t use that chance.

The over/under the limit for the total number of points is 235, which is way too many for Monday’s event. Usually, when two teams play back to back matches, the efficiency is lower in the second game. We saw that when Heat played with Toronto, and once Brooklyn faced Cavs recently.