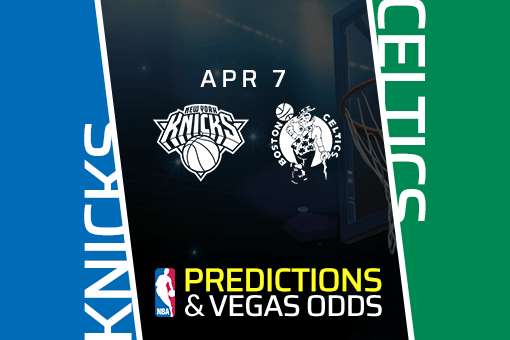 We have a divisional matchup as the New York Knicks (25-26) are set to square off against the Boston Celtics (25-26) for the second time this season. These two rivals are separated by one spot in the standings but are both safely in the playoffs as of now. Both sides are coming into this contest fresh off losses.

Knicks Limp into this Matchup

The second half of the NBA schedule was going to be brutal as the league tried to fit in all the postponed games from the first half. It’s beginning to take its toll on the New York Knicks as they have lost four of their 5 matchups. This group has had chances to win games, but due to the heavy minutes and compact schedule, closing games has been an issue.

The Knicks were dominant the last time they faced the Celtics, holding them to 75 points in a 105-75 clobbering. Mitchell Robinson played a big role in that game, but due to a fractured foot, he will not be available in this game.
All-star forward Julius Randle is playing around 37 minutes per game and hasn’t missed a game this season. He is averaging 22.9 points per game, 10.8 rebounds, and 6.0 assists per game. Randle has struggled as of late shooting the ball, but because of the lack of size the Celtics have in the paint, he should be able to get going around the rim.

The Boston Celtics are one of the more interesting teams in the league. Having been to 3 of the last 4 conference finals, this team finds themselves at (25-26) and 8th in the Eastern Conference. This team has been searching for an identity all year long, but due to Covid-19 and injuries, they haven’t been able to play much together at all.

They had shown signs after winning two straight games before getting beat up by the 76ers on Tuesday night. Newly acquired forward Evan Fournier is headed to the league’s health and safety protocol, so they will be without him in this game.

Fans thought the return of Kemba Walker and Marcus Smart would benefit this team, but Kemba, over his last three games, has only averaged 12.3 points per game, and Smart is still shaking off the rust from his lengthy layoff. Jaylen Brown has slowed down a bit since the all-star break but is still averaging 22 points per game.

Jayson Tatum has picked up his play to help keep the Celtics afloat. The star forward is averaging 25.4 points per game, 6.5 rebounds, and 3.8 assists since the All-star break. His growth on the defensive end has helped this team as he has taken some pressure off other guys being able to guard 4 positions. Tatum missed 16 games in the first half of the season because of Covid and did not play in the first matchup against the Knicks.

Knicks vs Celtics Prediction and Pick

The Celtics have struggled this season with health and finding any kind of flow. Head coach Brad Stevens made some offensive adjustments to get the ball moving as they had 31 assists and 29 assists in their previous two wins but got away from that in the loss to Philly with only 19 assists as a team.

The Knicks are known for their hard-nosed ability to defend and are also a little more rested coming into this game. Physically the Knicks should be dominant, but after last night’s loss, Stevens should get the Celtics back on track, and the team assist totals should go up. The Boston Celtics are slight favorites in this game by -3 points.