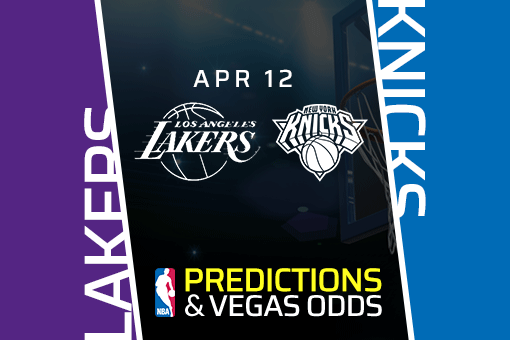 The Los Angeles Lakers are coming off a surprising win over the Brooklyn Nets and now have their eyes set on the New York Knicks. With superstars Lebron James and Anthony Davis out indefinitely, the supporting Lakers cast has had to step up. Dennis Schroder and Andre Drummond are two players that have kept the team afloat in James and Davis’ absence.

The Knicks will be playing back-to-back games after facing the Toronto Raptors on Sunday night. These quick turnarounds are tough for teams to stay competitive and healthy. The good news for the Knicks is that they won’t have to deal with the best one-two punch in the NBA. With Davis and James out for multiple weeks, the Knicks are in a good position to take this one.

It’s a tough task to ask of a young player, but Dennis Schroder has been doing his best to keep the Lakers in contention in the Western Conference. In their most notable win in the absence of James and Davis, the Lakers were able to defeat the Brooklyn Nets.

You would think with the number of players listed on the injury report for the Los Angeles Lakers; their spread record would suffer. However, over the last five games, the Lakers have gone 4-1 ATS. That, along with the shocking win over the Brooklyn Nets and a huge win over the Toronto Raptors, you should have some confidence in the Lakers covering.

The New York Knicks aren’t a team that most people take a second look at, but they’re proving they have what it takes to contend. They stunned the Memphis Grizzlies a few nights ago and lost by just two to the strongest team in the Eastern Conference, the Brooklyn Nets. This uptick in production is mostly due to RJ Barrett and Julius Randle.

The Knicks have one of the best against the spread records in the NBA, which gives bettors tons of reasons to trust them at the sportsbook. They have a solid record at home as well, and with a spread this small, the Knicks seem to be the team to take here.

Between these two teams jostling for a win, who should you place your money on at the sportsbook?

The Lakers are dealing with too many injuries to come out of this one with a win. Although the Knicks will be playing back-to-back nights, at least they’re at home, so they don’t have to worry about traveling.

A common trend between both of these teams is how often the games go under the total. Considering James and Davis will be out for some time, the Lakers’ production on offense has suffered.