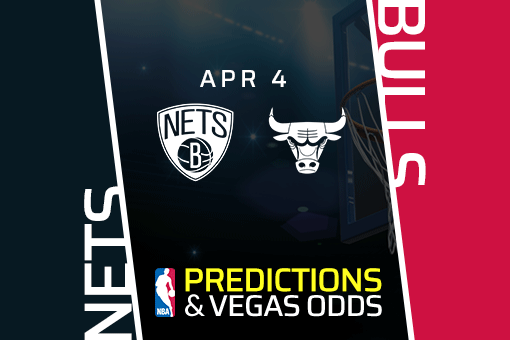 There were a record number of 40+ point blowouts in the NBA on Saturday night, and it’s looking like Sunday has the potential to get started off the same way. The Brooklyn Nets visit the Chicago Bulls with one team on a four game win streak and the other having dropped six in a row. Chicago (on the losing streak) does get a break though with James Harden (hamstring) ruled out. That’s a major reason why the Nets are just -2.5 favorites.

Nets Still Get It Done Without Harden?

Brooklyn will be without Harden’s 25.9 points, 11.1 assists, and 8.2 rebounds per game which is a significant blow, but this team is still very talented. Kyrie Irving will get free reign of the offense, and he has gone for 27+ points in four of the last five games.

There’s a lot of other things going on for Brooklyn that points to the -2.5 line being way too low. The Nets already have a game under their belt without Harden, beating Charlotte 111-89 last time out even while playing on 0 days rest. Irving didn’t need to be spectacular with just 15 points and 11 rebounds, while five different Nets players had at least 14 points.

That 20+ point win over the Hornets also came as -2.5 favorites, but more importantly it was held on Thursday night. That gives Brooklyn two nights off before facing a Chicago team that just returned home from a four game West Coast swing.

Can Chicago Improve Back at the United Center?

The Nets should greatly benefit from the extra night off, as they’ve got some veterans on their team including the newly signed Lamarcus Aldridge, as well as Blake Griffin and Deandre Jordan. Chicago wrapped up a West Coast swing on Friday, but is that enough time to recover from a brutal road trip?

To be fair the Bulls did play better against the Jazz last time out, losing ‘only’ 113-106 against the top team in the NBA. Prior to that though Chicago lost by 16 in San Antonio, 14 at Golden State, and also a respectable 5 in Phoenix.

The addition of Nikola Vucevic hasn’t given the Bulls the boost they thought it would – at all. He’s hit 21+ points and 9+ rebounds in three of four games, but Chicago has gone 0-4 in that span. The Bulls needed a season high 25 from Thad Young to stay close with the Jazz.

Nets vs Bulls Prediction and Pick

If Harden was playing on Sunday afternoon it wouldn’t be unrealistic to see the Nets favored by 8 or 9 points…or more. The loss of the triple-double threat definitely hurts, but does it change things that much? Chicago is in a rut right now losing six straight and yes, they can’t lose forever. This one isn’t it though.