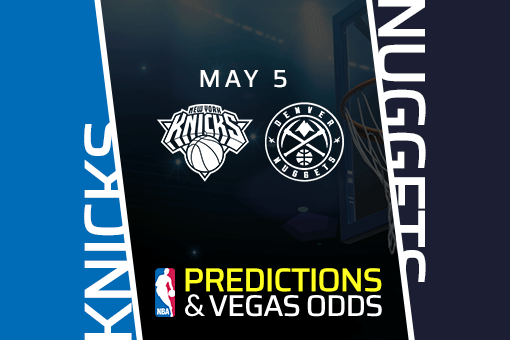 The New York Knicks and Denver Nuggets are both locked into the NBA postseason, with the only question left being what seed they will claim. In this game, the Knicks and Nuggets both look to improve their position relative to the competition in what should be a tough test for both sides.

The New York Knicks are the hottest team in the NBA right now. They have won three straight games and an impressive 12 of 13. But the Knicks begin their biggest test of the season on Wednesday against the Nuggets, as the Knicks play the Nuggets, Suns, Clippers, and Lakers in consecutive road games.

In addition to the difficult stretch of schedule for the Knicks, this game against Denver gives them a chance to test themselves against an MVP candidate in Nikola Jokic. Nerlens Noel and Norvel Pelle are both on the injury report in the frontcourt with ankle injuries. If they are going to stop Jokic, it will have to be a team effort and would speak volumes about their ability to compete against the league’s best.

Working in the Knicks’ favor coming into this game is their three-point shooting. The Knicks have worked their way up to third in the NBA in three-point shooting percentage this season, converting 39% of their attempts on the year. While Jokic may get his, the Knicks can cancel him out with their proficiency beyond the arc.

Nuggets Keeping It Together

The Denver Nuggets suffered one of the worst injuries of the 2020-2021 season when Jamal Murray was lost for the year with a knee injury. But they have done a great job of keeping themselves afloat thanks to the presence of role players like Michael Porter Jr. and Facundo Campazzo. With their role players backing up the efforts of Nikola Jokic, the Nuggets have played well in spite of the loss of one of their leaders.

On Monday, the Nuggets suffered a loss to the Lakers that exposed some flaws with their current construction though. Against the top-rated defensive team in the league in the Lakers, the Nuggets failed to put up 100 points. Against another top-five defense in the Knicks, the Nuggets may be in for another difficult night putting points on the board.

Nikola Jokic is the best player on the floor in this game. But the New York Knicks have vastly superior cohesion and consistency throughout their roster at the moment. Expect the Knicks to continue to knock down threes and play just enough defense to keep this contest within a possession.