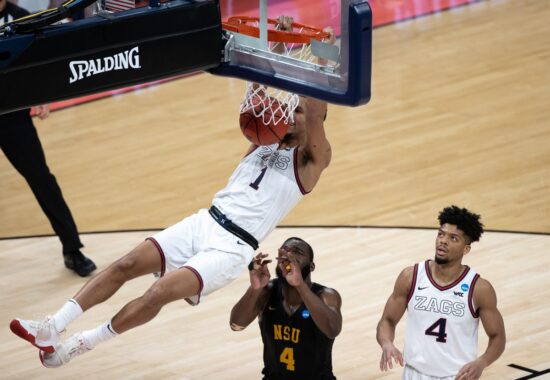 The #8 seeded Oklahoma Sooners are fresh off a slim victory against the #9 seed Missouri, but they are up against the clear tournament favorite in Gonzaga. The #1 seed has not missed an NCAA tournament since 1999, but they have never won it either. At 27-0, leading the nation in points per game and field goal percentage, this may just be their best chance yet.

Gonzaga have not lost a game, and the most recent win over Oklahoma was their 26th win by double digits. Their only other win was against West Virginia with a five-point margin. Their conference is weaker than most, yes, but they have not slipped up once. You can credit their high-scoring average to a mediocre conference, but they are shooting better than anybody else in the nation. This is a team that has made consistency their bread and butter.

Corey Kispert, Drew Timme, Jalen Suggs, Joel Ayayi, and Andrew Nembhard. You would be hard-pressed to find a better starting lineup. They ended Norfolk State without sweating, and Oklahoma will have to play fantastic basketball to end up with a different fate.

Oklahoma Back In Form?

Oklahoma finished their season 2-5 with both wins coming against Iowa State, who finished their season 2-22. Their recent win over Missouri broke a seven-game losing streak against the spread but is the turnaround against Missouri a sign that the team that began the year with wins against Alabama, Kansas, and Texas back in action and ready to dethrone the clear favorites.

They got much-needed help from Elijah Harkless. The Junior guard brought out his first double-double of the season, providing much-needed assistance with Oklahoma’s second-highest scorer De’Vion Harmon out after testing positive for COVID. Oklahoma’s scoring has been inconsistent, to say the least. Austin Reaves has been lighting up the scoreboard, averaging 20 points in their last 20 games with 17.9 points-per-game on the season. The second-highest scorer available is Bradey Manek, who dropped 19 against Missouri but has found himself scoring less than five in far too many games to be considered reliable.

Who will win the Gonzaga vs Oklahoma game:

This game is not a close one. Oklahoma has not been playing the best basketball they can play, and their best won’t be able to take down Gonzaga’s anyway.