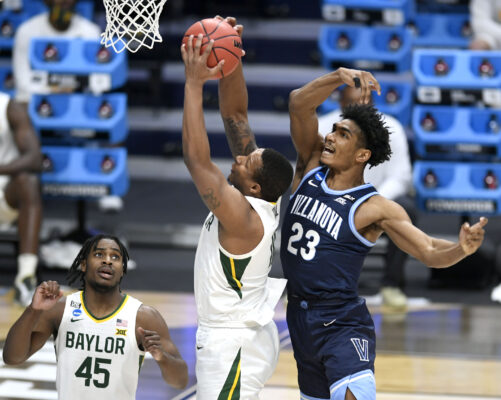 The South Region of the 2021 NCAA Tournament has gone nearly according to plan, and it should set up a terrific game in the Regional Final. The top-seeded Baylor Bears will take on the third-seeded Arkansas Razorbacks for the right to advance to the Final Four.

Baylor has looked sharp in the first three rounds of the tournament, pulling away from the Villanova Wildcats in the Sweet 16. Arkansas has needed three straight double-digit rallies to get to this point, beating Oral Roberts in thrilling fashion on Saturday night.

The Bears are shooting better than 40 percent from the three-point line this season, and they have four guards that can all light it up. Jared Butler is the best player on this roster, but Baylor was able to move past Villanova even as their leader was struggling.

Baylor is scoring 83 points per game this season, while holding opponents to just 65 points per game. The Bears can score points in a hurry, but their biggest strength is the relentless defense that they play.

The Bears have been one of the top picks to win the NCAA Tournament, and they have not disappointed yet.

Every time Arkansas has fallen behind in the NCAA Tournament, it resorts to driving to the rim and crashing the offensive boards. That strategy has worked so far for the Razorbacks, but Baylor has size and strength to limit their easy buckets.

Freshman Moses Moody leads the team with 17 points per game this season, but it was Jalen Tate that took over in the win against Oral Roberts.

Arkansas will need to make three-point shots on Monday, something it doesn’t always do well.

Who will win the Baylor vs Arkansas game:

Arkansas wants to turn this game into an up-and-down affair, but that style of play actually suits Baylor as well. The Razorbacks do most of their damage from inside the paint, but Baylor counters by being the best three-point shooting team in the country.

Arkansas will keep this game close for about 30 minutes, but Baylor just has an extra gear that they are able to get to. The Bears will flip that switch in the final 10 minutes and cruise to a double-digit win.