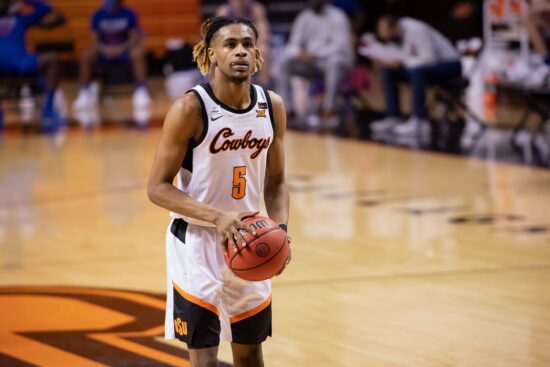 Baylor travels to Oklahoma this weekend to take on conference rival Oklahoma State. The Cowboys will look to hand the Bears their first loss of the season, and try to make a dent in Baylor’s in the Big XII standings.

Baylor has already taken care of conference blue bloods Oklahoma, Kansas, and Texas Tech, but still remain just a single game ahead of Texas in the championship race. Oklahoma State is three games behind the Bears, but a win would go a long way in slicing into that lead.

Who will leave Stillwater with a win in this Big XII showdown?

Baylor Continues To Be the Nation’s Top Team

The Bears have reeled off 13 straight wins, taking down three ranked foes along the way. The team enters playing great on both sides of the ball, and seems primed for a deep run in the NCAA tournament.

Baylor possesses the league’s best scoring offense, scoring at a clip of 86.5 points a contest, while also ranking second in the conference in points allowed (61.7 ppg). They’ve converted on more than 50% of their shots from the field, while holding opponents to a mark of just 41%. They also lead the Big XII in three-point shooting, connecting on 42% of their shots behind the arc.

That offense is paced by leading scorer guard Jared Butler, who is one of four team members to average double figures. Jonathan Tchawma Tchatchoua is the Bears’ best rebounder, bringing down 6.8 boards a game.

Baylor has been efficient with the ball, too, averaging a league-leading 18 assists per game, while nabbing 9.5 steals an outing. They’ll look to continue that against an Oklahoma State group that turns it over more than 14 times on average.

Cowboys Hope To Pull the Upset

Oklahoma State will try to hand the Bears their first loss of the year, and continue on their own track of recent success. The Cowboys have won three of their last four conference matchups, taking down Kansas, Kansas State, and Texas Tech. Kansas and Texas Tech were both ranked inside the top 15 at the time of the victories.

They’ve won with strong offense, as the group has averaged 77 points per game over their last five appearances. Cade Cunningham leads the way, scoring at a clip of 17.8 points a contest, while also averaging 3.8 assists and a block.

Isaac Likekele is also scoring in double figures, and also leads the team in rebounding, bringing down 7.8 boards an outing.

On defense, the Cowboys have struggled a little bit, ranking eight out of ten teams in the conference. They’re one of just three league teams allowing more than 70 points a game. They’ll need to shore that up versus Baylor, as they can’t afford to get into a shooting match with the league-leading Bears.

Baylor has been too good to bet against this year, even when playing on the road. The offense has been dominant, and the defense ranks among the top in the conference. Oklahoma State has played well after getting off to an 0-2 start in league play, but the Bears will prove too tough to handle.