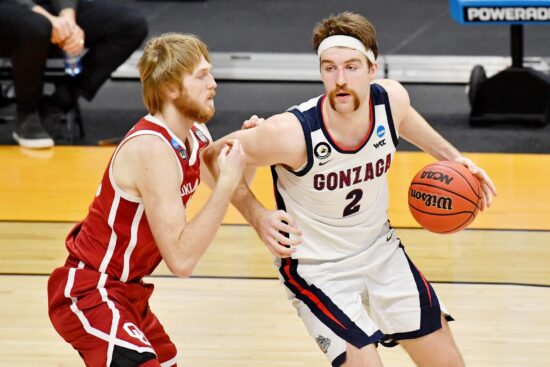 Creighton will look to knock off Gonzaga and end the No. 1 seeds chance at history. Gonzaga, the top seed in the tournament, are sitting at a perfect (28-0) after a dominant 87-71 win over No. 8 seed the Oklahoma Sooners in the second round. The Bulldogs have won 25 straight games by double digits as they draw closer to becoming the first undefeated team to win a championship since Indiana in 1975-1976.

Creighton Bluejays are 22-8 and have won five of their last six games, including Monday’s win over No. 13 seed Ohio 72-58. The Bluejays come into this game as big underdogs in the West Region semifinal.

Sophomore forward Drew Timme was spectacular for Gonzaga in the round of 32, leading the Zags with 30 points and pulling down 13 rebounds. The points were a career-high, and the rebounds matched a career-best for the sophomore. Timmie was 9/12 on shot attempts and finished 12/14 from the free-throw line.

Senior forward Corey Kispert chipped in 16 points despite the early foul trouble that saw him sit much of the first half. Freshman guard Jalen Suggs had 16 points and three assists after a slow first-half start.

Kispert is one of the best pure shooters in the country with percentages of 54.8 from the field, 45.8 from three, and 90.1 on freebies while averaging a team-best 19.1 points per game. Staying out of foul trouble is going to be the name of the game as he is the key player to watch in this game. His ability to shoot the ball will open up the inside-out game for Timmie.

Creighton’s offense could give Bulldogs a scare

Creighton Bluejays have been successful all season long, getting contributions from multiple players as five guys scored in double figures, led by junior guard Marcus Zegarowski’s 20 points. The 20 point performance was Zegarowski’s 6th of the season.

The Bluejays played a great defensive game holding Ohio to 32% on shots. Containing Timmie and this loaded Zags offense is going to be a daunting task but a challenge this team will be ready for.

Who will win the Creighton vs Gonzaga game:

Gonzaga Bulldogs are one of the best offensive teams in the country at #1 in points scored during the season. Defensively this team has started to click, finding themselves at #8 overall. Loaded with a bunch of guys that can score the ball, the Bluejays are going to have a hard time containing this group.

Gonzaga are making its sixth straight Sweet 16 appearance, while the Blue Jays have not been this deep since 1974. The winner advances to play No. 6 seed USC or No. 7 seed Oregon.

Gonzaga Bulldogs are looking to make history and having history on their side with a 32 game winning streak that dates back to the shortened pandemic season. Bluejays are full of experience and have a very balanced scoring attack. They should give Gonzaga a tough game and play hard knowing the Elite 8 awaits, but the Bulldogs have too much talent and depth.