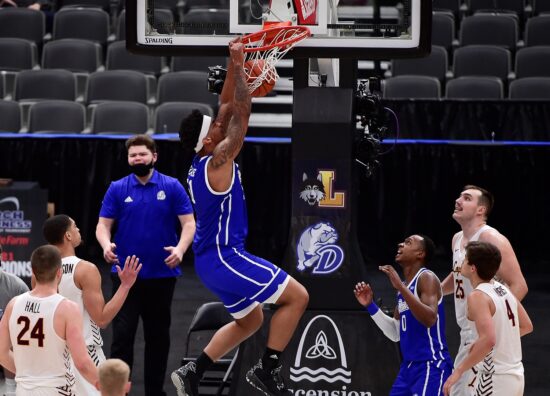 Drake will be looking to get revenge for the Missouri Valley Conference since Wichita State left for the AAC. This will be the Bulldogs’ first trip to the NCAA Tournament since 2005. Drake was a five seed and lost to Western Kentucky 101-99 in overtime.

While Drake will still be missing star point guard Roman Penn, Shanquan Hemphill looks like he could make his return after missing the last nine games. Hemphill is the team’s leading scorer (14.1) and second-leading rebounder (6.3).

Joseph Yesufu, the sixth man of the year in the Missouri Valley, has become Drake’s best player with injuries to Penn and Hemphill. Yesufu is averaging 12.1 points and shooting 37.8% from behind the arc.

Drake has the 19th most efficient offense in college basketball. The Bulldogs have the 11th lowest turnover rate at 15.2%.

Drake is ranked 53rd by Kenpom. The defense is a weakness as they are ranked 120th in the country.

The Shockers won eight in a row before falling to Cincinnati in the AAC Tournament to end the season. They defeated a top 10 Houston team to give themselves the high-end win they needed to pass other teams on the bubble.

Tyson Ettiene leads the Shockers. Ettiene is averaging 17 points, 3.5 rebounds, and 2.6 assists per game. He is shooting 40.1% from the three-point range.

Alterique Gilbert is the other double-digit scorer for Wichita State. Gilbert is averaging 10.2 points and leads the team in assists (4.1) and steals (1.5).

Kenpom has Wichita state ranked 74th. The offense is 56th in efficiency, while the defense ranks 103rd. The Shockers give up an offensive rebounding percentage of 33.4%, which is one of the worst in the nation.

Who will win the Drake vs Wichita State game:

The line moved two points when the news of Hemphill returning broke. The Bulldogs struggled down the stretch without their two best players but beat a good Missouri State team and gave Loyola-Chicago a good game in the MVC Championship game.

Wichita State does everything well on offense except shoot. The Bulldogs aren’t a great defensive team, but the Shockers won’t be able to take advantage as Drake advances in the West Region to take on USC.