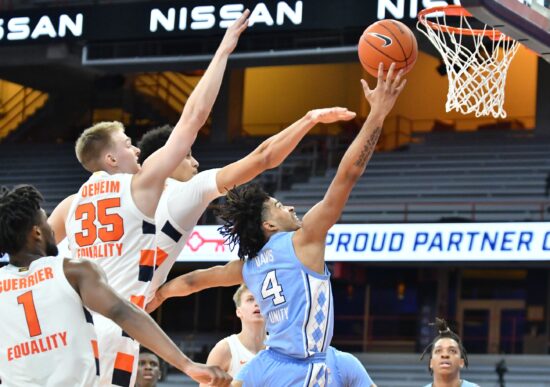 The Duke Blue Devils have vengeance on their minds when they visit the North Carolina Tar Heels on Saturday night. UNC came into Cameron Indoor Stadium on February 6th and left with a 91-87 win on their rivals home court. Both squads are coming into this matchup off losses, an indicator that they’ve each been caught looking ahead to this battle.

Duke boasts the leading scorer in the ACC as Matthew Hurt puts up 18.9 ppg. The big problem is that he doesn’t get a whole lot of help. After Jalen Johnson opted out the rest of the season (11.2 ppg), DJ Steward is the only other Blue Devils player averaging in double figures.

Hurt is still great though, going for 37 points in a loss to Louisville last Saturday and posting 22+ in four of the last six. He only had 7 points in the first meeting with North Carolina though, mostly because the Tar Heels are absolutely huge on the interior. When 6’10” starters Armando Bacot and Garrison Brooks leave the game, they are replaced by 7’1” Walker Kessler.

Duke has now lost two straight games, and when they needed them most with their tournament lives on the line. Those defeats have been a 73-80 home loss to Louisville and an 81-77 loss at Georgia Tech. Those are two good opponents, and both Blue Devils losses came in overtime so they are fighting.

North Carolina was able to capture a 91-87 win at Duke a month ago. That victory was fueled by 25 points from Caleb Love, and a very balanced UNC attack overall as six Tar Heels players had at least 11 points.

Putting up points against Duke is nothing new, as Mike Krzyzewski’s squad has the 4th worst defense in the ACC, allowing 71.3 per. Overall the Tar Heels are just so inconsistent though. They lost 72-70 at Syracuse on Monday in a game that really wasn’t even that close. Over the last three games UNC has also fell 83-70 at home to Marquette as whopping -9.5 favorites.

There’s no doubt that North Carolina is talented – and huge. They are also very young too though as it was four freshmen that were the only players in double figures in the 78-70 home upset of Florida State last weekend.

Who will win the Duke vs North Carolina game:

Ultimately this game comes down to if you catch North Carolina on a good night or bad? The Tar Heels were great against the Seminoles last Saturday, but have also laid an egg vs. Syracuse and Marquette over the last three games. Rivalry meetings mean that you ‘get up’, and when UNC is up they are solid.