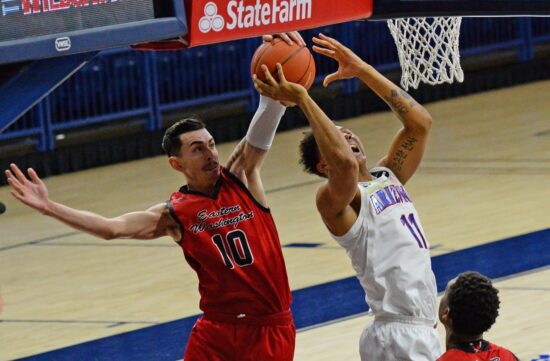 The (14) Eastern Washington Eagles will take on the (3) Kansas Jayhawks in West Regional action in Round 1 of the NCAA Tournament. The winner of this game will advance to take on the winner of the USC-Wichita State/Drake winner on Monday.

Eastern Washington has won four straight games, including the Big Sky Championship Game over Montana State. Kansas had won three straight games before being forced to withdraw from the Big 12 Conference Tournament.

Eastern Washington comes into this game averaging 78.0 points, and they will look to push the tempo on Saturday. The Eagles have not faced a defense as strong as Kansas all season, but EWU can shoot their way past any team.

Forward Tanner Groves leads this team with 16.4 points per game, but four other players are scoring in double-figures. Eastern Washington is shooting better than 35 percent from the three-point line, and they have shown the ability to light it up in a hurry.

This team is also holding opponents to just 69 points per game, and they could put up a low number against a depleted Kansas squad.

Defense Must Dominate For Kansas

Kansas has not been a great offensive team for much of the season, and now they are missing two of their better scoring options. Jalen Wilson and David McCormack are two players not expected to play, and that hurts a team averaging just 73 points per game.

Ochai Ogbaji leads the Jayhawks with 14.2 points per game, and his shooting could help lead Kansas to the Second Round.

The Jayhawks have held opponents to just 65 points per game this season, and head coach Bill Self has encouraged his team to slow things down. Kansas will not have a ton of depth, but they have the size and length to give the Eagles some problems.

Who will win the Eastern Washington vs Kansas game:

Kansas comes into this game with a lot of unknowns, but they are still the better team in this matchup. Eastern Washington does have the talent to keep it close, but actually winning the game is another matter.

A full-strength Kansas team would have little trouble winning this game in blowout fashion, but Eastern Washington is catching a big break. Look for the Eagles, some pressure on Kansas throughout, but ultimately the Jayhawks win and advance.

It all points to a close and exciting match, so betting on Washington Eagles to keep it within the spread looks like the best call here.