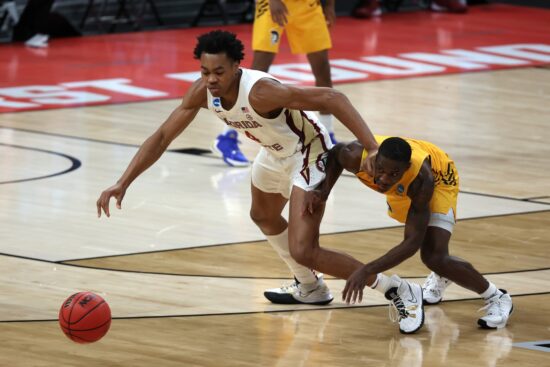 There were plenty of upsets in the First Round of the NCAA Tournament, but Florida State and Colorado did not fall victim. These two teams will meet up on Monday night for a chance to advance to the Sweet Sixteen in the East Region.

Florida State is the number 4 seed in the East, and the Seminoles hung on to beat UNC-Greensboro in the First Round. Colorado, the number 5 seed, had little trouble in dispatching the Georgetown Hoyas.

The Florida State Seminoles are averaging more than 78 points per game this season, despite not having a true offensive star. Florida State shares the ball extremely well, and they have plenty of players that are capable of stepping up.

M.J. Walker and RaiQuan Gray are both scoring over 12 points per game this season, and it was Gray that stepped up late in the First Round win. Florida State shot the ball poorly against UNC-Greensboro, but the Seminoles are shooting 39 percent from deep this season.

On the defensive end of the floor, the Seminoles are holding opponents to less than 70 points per game, and they put a ton of pressure on their opponents.

The Colorado Buffaloes lit it up on Saturday afternoon, torching the Georgetown Hoyas for 96 points. Colorado shot better than 55 percent from the three-point line in the win, and the Buffaloes could use another great shooting night on Monday.

McKinley Wright IV leads this team with 15.4 points and 5.8 assists per game, and he will look to push the tempo against Florida State. Colorado shares the ball well, and they won’t be afraid to look to challenge the Seminoles defenders at the rim.

Colorado is holding opponents to less than 64 points per game this season, and that defense could slow down the explosive Seminoles attack.

Who will win the Florida State vs Colorado game:

Colorado was on first in the First Round win over Georgetown, but they are facing a much tougher defense in this game. The Seminoles are also the much deeper team in this matchup, and Florida State will try to wear down the Buffaloes.

This should be a terrific game, and these teams are evenly matched. Florida State has more size in this matchup, and that should allow them to get some easier scores inside.

In one of the most exciting games of the Second Round, the Florida State Seminoles will advance to the Sweet 16 by knocking off the Colorado Buffaloes with some clutch plays late.