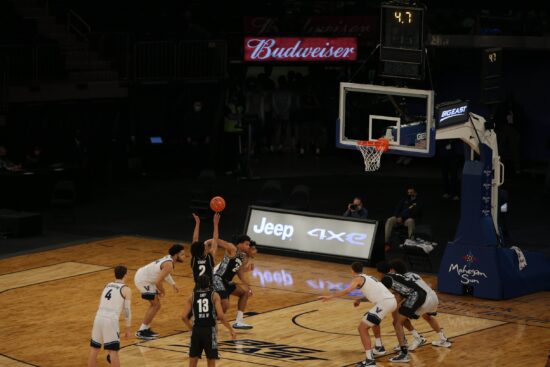 The first of Friday’s two Big East Tournament semifinals will be an old-school matchup between the no. 5 seed Seton Hall Pirates and the no. 8 seed Georgetown Hoyas. On the hallowed court at Madison Square Garden, the Pirates are 2.5-point favorites over the Hoyas, with the over/under set at 142 points.

The 11-12 Hoyas are two wins away from becoming a bid-stealer. Georgetown was just 7-9 inside the Big East during the regular season. But after taking care of business against Marquette on Wednesday, the Hoyas knocked off an undermanned Villanova team on Thursday afternoon to reach the Big East semifinals.

Meanwhile, the Pirates are hoping to grab the Big East’s automatic bid, so they don’t have to sweat it out on Selection Sunday. Seton Hall is very much on the outside of the bubble after losing four in a row to end the regular season, including a road loss against Georgetown. A win on Friday probably won’t be enough for the Pirates, who won’t be dancing without winning the Big East Tournament.

Georgia On My Mind

It’s no secret that the Pirates are led by Sandro Mamukelashvili, a native of the Republic of Georgia. The 6’11’’ senior is a skilled and versatile player who led the Pirates in points and rebounds and was second on the team in assists. He essentially plays the role of a point-forward with the offense revolving around him. His importance was on display in the quarterfinals against St. John’s when he had 20 points and 11 rebounds.

The question for Seton Hall is what they can extract from the supporting cast around Mamukelashvili. Fortunately, the backcourt tandem of Jared Rhoden and Myles Cale both average double figures, while point guard Shavar Reynolds helps propel the offense with 4.3 assists per game. However, points from other sources were scarce during Thursday’s win over St. John’s, and the Pirates will need a more diverse attack if they’re going to keep winning.

After winning two games in New York, Georgetown have now won four of five and six of eight coming down the stretch. The key has been the play of the frontcourt, as center Qudus Wahab and forwards Jamorko Pickett and Chudier Bile are three of the four Georgetown players who average double figures. Wahab, in particular, has come into his own lately, scoring 16.3 points per game in his last four games. Meanwhile, Bile is a question mark, having scored just seven points over two games during the Big East Tournament. But that trio gives the Hoyas size and athleticism along the frontline.

Of course, the backcourt is all about senior Jahvon Blair. He’s averaging 16.1 points per game and has scored 20 or more in two of his last three games. Unless Donald Carey gets hot shooting the ball, the rest of the Georgetown backcourt doesn’t always contribute much. However, Blair has played well down the stretch and can take charge when the Hoyas need a basket.

Who will win the Georgetown vs Seton Hall game:

It’s been over two months since Georgetown’s last loss to a team that isn’t currently projected to make the NCAA Tournament. On the other hand, the Pirates were cold down the stretch until beating St. John’s on Thursday. Bet on the Hoyas staying hot and winning on Friday night.