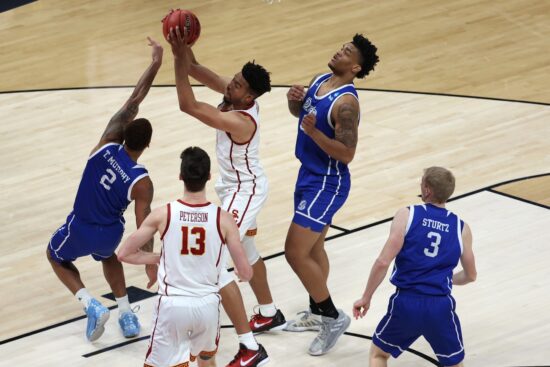 This round of 32 matchup will be a battle of two top ten defenses. Kansas ranks 9th in defensive efficiency, and USC ranks 10th.

Jayhawks Look to Advance Without Wilson

It appears Kansas will again be without the services of Jalen Wilson. Wilson has been out due to contact tracing, but the Jayhawks did get David McCormack back for the first round, but just barely. McCormack arrived the morning of the game but still managed to play 25 minutes and 22 points despite not being able to practice. McCormack will need to be on his game as he will have to guard a future NBA lottery pick in USC’s Evan Mobley.

Jayhawks Need to Find the Third Option on Offense

The Kansas offense usually runs through the trio of McCormack, Ochai Agbaji, and Jalen Wilson. With Wilson out, Kansas will need to find a third option as USC’s defense is elite.

The two most obvious answers for coach Bill Self are Marcus Garrett and Christian Braun. Garrett looked outstanding in the opening round with 20 points and eight rebounds.

Agbaji leads the team in scoring at 14.4 points per game. Agbaji scored 21 points in the victory over Eastern Washington.

McCormack is the team’s second-leading scorer at 13.7 points per game. He is shooting 51.5% from the field.

The Jayhawks are ranked 18th by Kenpom. The offense is 45th in offensive efficiency and 9th on defense.

The Pac-12 was not listed as one of the best conferences in the nation this year. Their NCAA Tournament performance might change that, as Pac-12 teams are 6-0 to start the tournament with Oregon State playing while this was written.

Tahj Eddy is the team’s second-leading scorer at 13.7 points per contest. He is shooting 38.6% from the three-point range.

Kenpom is ranked 9th by Kenpom. The offense is 23rd in efficiency and 10th on defense. They are holding their opponents to an effective field goal percentage of 45%, which ranks 8th in the nation.

Who will win the Kansas vs USC game:

The Trojans have become more and more efficient as the season has gone on. Having a future top-five pick in the NBA certainly doesn’t hurt.

Mobley has become a much better player to go with his jaw-dropping skill set. McCormack is a solid NCAA player, but the skill difference outside of the lane will be noticeable.

USC wins and advances as the Pac-12 continues to roll through this year’s tournament.