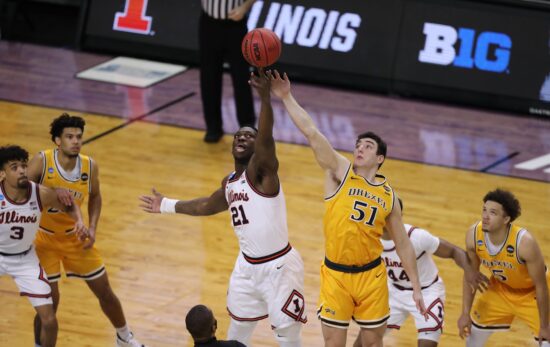 The (8) Loyola Chicago Ramblers will take on the (1) Illinois Fighting Illini on Sunday in a Second Round matchup in the Midwest Region. This is one of the most highly-anticipated matchups of the NCAA Tournament, as the Ramblers have been known to play the role of Cinderella.

Illinois is the number three overall seed in this tournament, and the Fighting Illini had no trouble eliminating Drexel in the First Round. Loyola Chicago was able to outlast the Georgia Tech Yellow Jackets to set up this matchup.

If the Ramblers are going to pull off this upset, then they will have to control the tempo on Sunday. Loyola Chicago is holding opponents to just 55 points per game, and they can’t afford to get into a track meet with Illinois.

Center Cameron Krutwig leads the Ramblers with 14.9 points per game, and he will have to be a force in this matchup. Krutwig will also be tasked with slowing down Kofi Cockburn on Sunday, a nearly impossible task.

Few teams are as efficient on both ends of the floor as Loyola Chicago, and they will need to be nearly flawless on Sunday.

Illinois is one of the deepest teams in the country, but they are also led by a pair of All-Americans. Kofi Cockburn was unstoppable down low in the win over Drexel, and guard Ayo Dosunmu is capable of a triple-double every time out.

Illinois is scoring 81 points per game this season, and they are hard to stop when they get out on the break. The Fighting Illini also have a very underrated defense, but their pressure should give the Ramblers trouble on Sunday.

Who will win the Loyola Chicago vs Illinois game:

Loyola Chicago will be plenty motivated to upset the biggest school in the state of Illinois, but the Fighting Illini are worthy of their number 1 seed. Loyola was able to dominate Georgia Tech with their defense on Friday afternoon, but stopping the Illini is a different challenge.

Kofi Cockburn and Ayo Dosunmu are simply too good, and Loyola Chicago will not have an answer for the two All-Americans. The Ramblers will battle the Fighting Illini until the final buzzer sounds, but they just don’t have the depth to keep up.

Illinois takes control of this game in the second half, and the number 1 seed in the Midwest Region marches on to the Sweet Sixteen with a double-digit win.