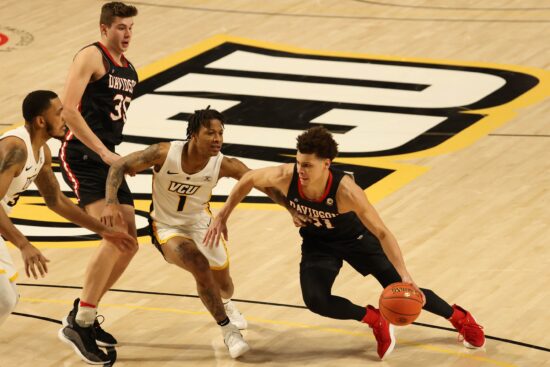 It was a miss on the NCAA tournament for both the NC State Wolfpack and Davidson Wildcats, but each will get a chance at postseason basketball in Thursday’s NIT matchup. NC State has earned the #3 seed for this tournament being held in the Dallas-Ft. Worth area. Davidson is the 3 seed.

It wouldn’t have been a surprise to see NC State favored in this one, due mostly to the fact that they played in the extremely tough ACC this season. The Wolfpack were 13-9 on the season, playing a schedule that features 7 teams that made the NCAA tournament.

The Wolfpack did have a somewhat unceremonious exit from the ACC tournament, falling 89-68 against Syracuse in their opener as just +3 point underdogs. NC State was playing very good basketball down the stretch too, winners of five straight including four on the road. After such a bad showing in the conference tourney, it’s hard to know what to expect from Kevin Keatts’ team.

NC State will be facing a very good Davidson defense, but the Wolfpack have some talented scorers – or had at least. Devon Daniels (16.5) was lost in late January with a torn ACL, leaving Jericole Hellems (13.1 ppg) and D.J. Funderburke (12.1 ppg) left to shoulder the offensive load. Hellems had just 7 points in the tournament game though.

A10 Was Solid This Year Too

Davidson may not have matched up with the likes of Virginia or Florida State on a nightly basis, but the Atlantic 10 did have two teams (St. Bonaventure, VCU) make the tournament. The Wildcats were just 1-3 vs. those teams on the year though, including a 52-64 loss to VCU in the A10 tournament.

The Davidson defense does rank 30th in the country in points allowed, giving up just 63.4 ppg. Once again is a lot of that due to quality of competition though? The Wildcats strength of schedule was 94th in the country during the regular season (NC State 60th).

The Wildcats are still favored on Thursday night though, and they have four players that put up double figures in scoring. Kellan Grady averaged 22.7 points in Davidson’s two A10 tournament games, and 16.8 per during the regular season. Hyunjung Lee had a 20-point game in the conference tourney, and Luka Brajkovic has hit 12+ in three of the last four.

Who will win the NC State vs Davidson game:

It was a bad ACC tournament showing by NC State, losing by 21 to Syracuse. You can’t discount how they played to end the regular season though, winning five straight including at #15 Virginia. That’s hard to overlook, especially with the team from the better conference getting the points on Thursday.