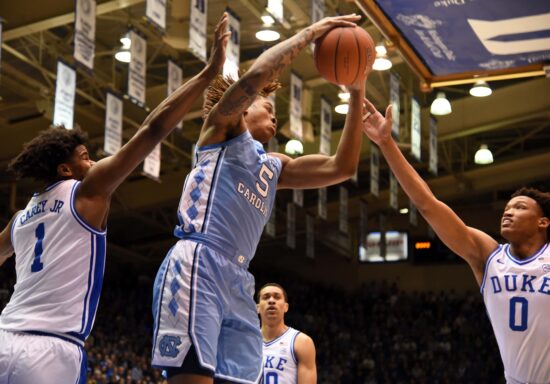 Both teams are coming into the Tar Heels vs Blue Devils game after defeats. No surprise there, knowing that both North Carolina and Duke have been horrendous in the 2020-21 college basketball season. The best evidence of their poor form is the fact that the game on Saturday is going to be the first time in 60 years that both teams are unranked.

The North Carolina Tar Heels (11-6) are coming to Durham after a 63-50 defeat to Clemson on Tuesday evening. They entered that game as 3-point favorites but ended up losing by 13 points.

Something similar happened with the Duke Blue Devils (7-6) one day before. The NCAAB odds on Duke against Miami (FL) were -667 before the game, but they ended up losing 77-76.

One of the reasons why this happened is that both teams had their minds already set on the Saturday’s game. After all North Carolina vs Duke is one of the biggest rivalries, not only in NCAAB, but all North American sports.

North Carolina vs Duke – The Fiercest Rivalry in College Basketball

The North Carolina Tar Heels and Duke Blue Devils are the biggest rivals in college basketball. Sports Illustrated on Campus named it “The #1 Hottest Rivalry in NCAA Basketball,” while ESPN called it “The Third Greatest North American Sports Rivalry.”

The two programs have met 252 times in history, with their first meeting happening back in 1920. The most recent Carolina–Duke duel happened last March, just before the season was stopped due to the COVID-19 pandemic.

In that game, the Blue Devils won themselves a victory. The final score was 89-76. However, it wasn’t always that easy – just a month earlier, Duke won by only two points in overtime.

Even though Duke’s been better in recent times, it’s North Carolina that leads the all-time series by 139-114.

First North Carolina vs Duke Game With Unranked Teams Since 1960

It wouldn’t be an overstatement to say that North Carolina and Duke have both been terrible this season. The Tar Heels have played 17 games this season, winning 11 of those. What’s interesting is that in three of the six games they lost, they were the pre-game favorites.

When it comes to the Blue Devils, it’s even worse – they were favorites in five of the six games they lost this season.

Due to their poor performances, both teams are no longer in the AP Top 25 Poll. As a result, the North Carolina vs Duke game on Saturday is going to be their first matchup since February 27, 1960, not to feature a ranked team.

On January 19, 2021, Duke lost its place in the ranking, following the defeat to Virginia Tech. Before that loss, the Blue Devils were in the #19 place.

North Carolina dropped out of the list in December, after losing to NC State. Before that game, they were #17. The good news for them, however, is that in the latest poll (published on February 1), they received three votes. Not much, but at least, it’s more than what Duke got – zero votes.

Who will win the Tar Heels vs Blue Devils game:

It’s going to be a close one, same as many of their duels in the past. Their most recent game saw Duke winning, but at the moment, North Carolina seems like a slightly better team. But, only slightly!