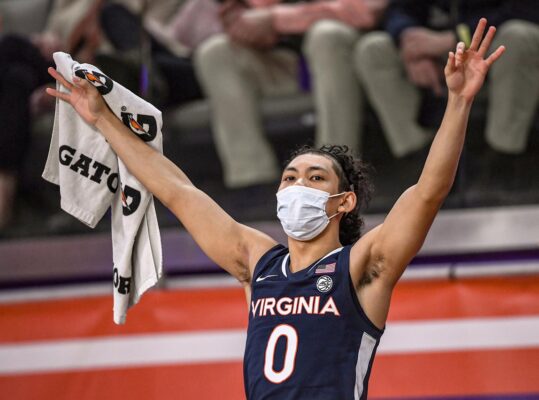 The North Carolina Tar Heels are coming off a huge 91-87 rivalry win at Duke, but that puts them in a very dangerous letdown spot in a visit to the Virginia Cavaliers. UVA is #9 in that nation, winners of 9 of their last 10, not to mention an undefeated 8-0 at John Paul Jones Arena on the season.

UNC Clicking Or Set to Falter?

At 12-6 North Carolina has had a decent, yet inconsistent season. Even though rival Duke is having a down year in their own rights, the Tar Heels made a statement going to Cameron Indoor Stadium and escaping with a 4-point win last Saturday night. It was a nice bounce-back for a UNC team that was held to 50 points the game prior against Clemson.

It was a balanced attack for North Carolina vs. the Blue Devils as all five scorers had 12+ points and Day’Ron Sharpe added 11 off the bench. Caleb Love led the way with a season-high 25 as UNC shot a sizzling 10-15 (67%) from three-point range.

Of course, Duke has the 2nd worst defense in the ACC, and things are going to be a bit tougher for Roy Williams’ team in a visit to Virginia on Saturday night. The Cavaliers lead not only the conference but are also 6th in the country in allowing just 59.4 points/game. We’ve seen North Carolina struggle against top-notch defenses, falling 50-63 at Clemson on February 2nd.

Virginia Gearing Towards the Postseason

Virginia has national championship aspirations and besides a 51-65 slip up at rival Virginia Tech, the last loss for the Cavaliers was 75-98 to #1 Gonzaga way back on December 26th. That’s a span of 10-1 over their last 11, and Tony Bennett’s team remains undefeated at home.

UVA has been fueled by their defense this season, most recently dominating the #4 scoring offense in the ACC, Georgia Tech, in a 57-49 home win. Four of Virginia’s last seven opponents have been held to under 60 points, a key stat against a UNC team that has scored 80+ in three of the last five.

Virginia likes to play small ball, with 6 of their top 8 scorers being guard. The Cavaliers do have some size though, as 7’1 Jay Huff is second on the team with 13.2 points/game. That big body is going to be key against the Tar Heels, who bode two gigantic starters in 6’10 Armando Bacot and 6’10 Garrison Brooks, who both average double digits in scoring.

Who will win the North Carolina vs Virginia game:

It would be easy to take Virginia in a rout, and their defense definitely is great. North Carolina has a very considerable size advantage, however, so this is going to be a mismatch of styles. The best play is the Tar Heels to keep things close in a high scoring game.